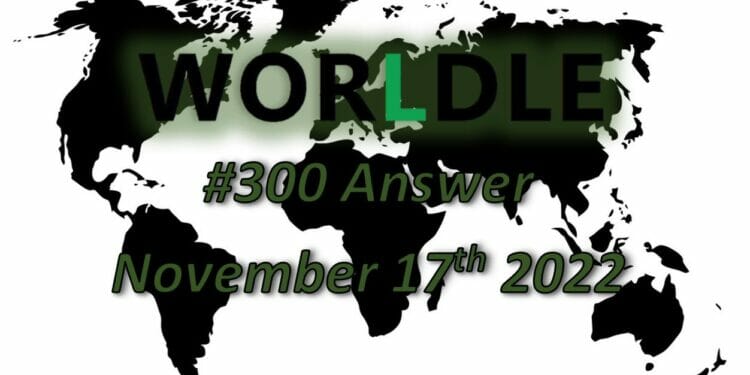 Here is the answer for the 300 Worldle country today, released on November 17th, 2022 and some hints to help you solve it.

UPDATE: Click here for the hints and the answer to Worldle 301!

Here is what the country/territory looks like for the Worldle 300 puzzle today:

The answer to the Worldle 300 country/territory today is…

FUN FACTS: It is the only country in the world where 2 Nobel Peace Prize winners lived on the same street.

Both Nelson Mandela and Archbishop Desmond Tutu had houses on Vilakazi Street in Soweto, Johannesburg.

South Africa, officially the Republic of South Africa (RSA), is the southernmost country in Africa. It is bounded to the south by 2,798 kilometres (1,739 mi) of coastline that stretch along the South Atlantic and Indian Oceans.

It is the southernmost country on the mainland of the Old World, and the second-most populous country located entirely south of the equator, after Tanzania. South Africa is a biodiversity hotspot, with unique biomes, plant and animal life. With over 60 million people, the country is the world’s 23rd-most populous nation and covers an area of 1,221,037 square kilometres. The largest city is Johannesburg.

What Are The Worldle 300 Bonus Answers Today?

There are three bonus rounds today and the first one is to guess the six countries that border South Africa.

The county outlines are shown to you and here are the answers to the countries next to South Africa below:

The second round is to guess the capital of South Africa.

The capital city of South Africa is…

The third and final bonus round is to guess the flag for South Africa. There are eight options for the flags, which can be seen below:

The answer is the flag that has horizontal bands of red (on the top) and blue (on the bottom), of equal width, separated by a central green band which splits into a horizontal “Y” shape, the arms of which end at the corners of the hoist side (and follow the flag’s diagonals). The “Y” embraces a black isosceles triangle from which the arms are separated by narrow yellow or gold bands; the red and blue bands are separated from the green band and its arms by narrow white stripes.

At the time of its adoption, the South African flag was the only national flag in the world to comprise six colours in its primary design and without a seal and brocade. The design and colours are a synopsis of principal elements of the country’s flag history. The colours themselves have no essential meaning.

Let us know in the comments section below if you managed to solve the Worldle today and if there are any other games you want us to cover. Click here for the hints and the answer to Worldle 301!