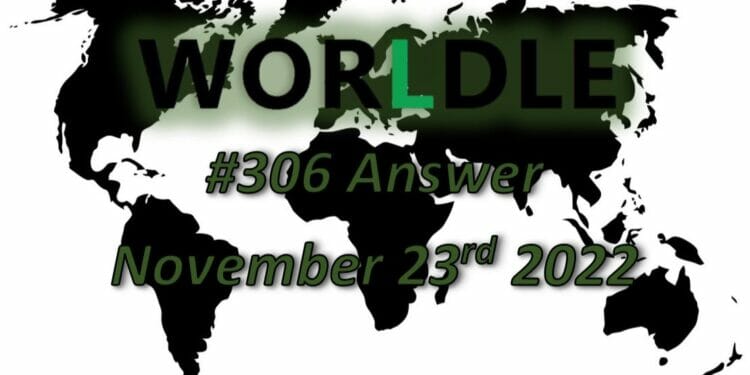 Here is the answer for the 306 Worldle country today, released on November 23rd, 2022 and some hints to help you solve it.

UPDATE: Click here for the hints and the answer to Worldle 307!

Here is what the country/territory looks like for the Worldle 306 puzzle today:

The answer to the Worldle 306 country/territory today is…

FUN FACTS: The Pakistani killer K2 or Godwin Austin is the second highest mountain in the world. It is part of the Greater Himalayas, known as the Karakoram, stretching into China and India. The Trich Mir is the third tallest in the world, followed by the Hindu Kush Mountains in Pakistan. As a result, the three highest mountains in the world, the Himalayas, the Greater Himalayas, or Pakistan’s Karakoram and Hindu Kush mountains, make it a significant but challenging choice for severe climbers and winter sports professionals destination.

Pakistan, officially the Islamic Republic of Pakistan is a country in South Asia. It is the world’s fifth-most populous country, with a population of almost 243 million people, and has the world’s second-largest Muslim population just behind Indonesia. Pakistan is the 33rd-largest country in the world by area and 2nd largest in South Asia, spanning 881,913 square kilometres. It has a 1,046-kilometre (650-mile) coastline along the Arabian Sea and Gulf of Oman in the south.

What Are The Worldle 306 Bonus Answers Today?

There are three bonus rounds today and the first one is to guess the four countries next to Pakistan.

The county outlines are shown to you and here are the answers to the countries next to Pakistan below:

The second round is to guess the capital of Pakistan.

The capital city of Pakistan is…

The third and final bonus round is to guess the flag for Pakistan. There are eight options for the flags, which can be seen below:

The Pakistan flag has a green rectangle which has a crescent and star in white on top. There is a white vertical band on the left side of the flag.

It is the third flag in the options in the image.

The combined star and crescent serve as a symbol of Islam, with the crescent representing progress and the five-pointed star representing light and knowledge. The flag symbolizes Pakistan’s commitment to both Islam as well as the rights of religious minorities.

Let us know in the comments section below if you managed to solve the Worldle today and if there are any other games you want us to cover. Click here for the hints and the answer to Worldle 307!