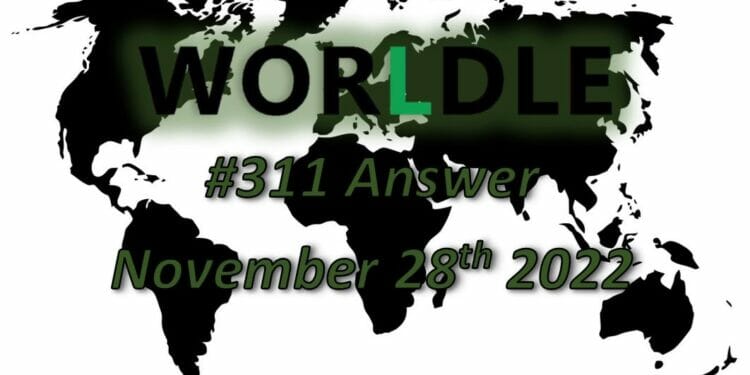 Here is the answer for the 311 Worldle country today, released on November 28th, 2022 and some hints to help you solve it.

UPDATE: Click here for the hints and the answer to Worldle 312!

Here is what the country/territory looks like for the Worldle 311 puzzle today:

The answer to the Worldle 311 country/territory today is…

FUN FACTS: The Republic of Austria, commonly just Austria, is a country in the southern part of Central Europe, lying in the Eastern Alps. It is a federation of nine states.

What Are The Worldle 311 Bonus Answers Today?

There are three bonus rounds today and the first one is to guess the eight countries that are border Austria.

The county outlines are shown to you and here are the answers to the countries next to Austria below:

The second round is to guess the capital of Austria.

The capital city of Austria is…

The third and final bonus round is to guess the flag for Austria. There are eight options for the flags, which can be seen below:

The Austrian flag has three stripes, two red and one white.

It is the seventh flag in the image with the options and you can see what it looks like below:

According to legend, the flag was invented by Duke Leopold V of Austria as a consequence of his fighting during the Siege of Acre. After a fierce battle, his white surcoat was completely drenched in blood. When he removed his belt, the cloth beneath remained unstained, revealing the combination of red-white-red. So taken was he by this singular sight that he adopted the colours and scheme as his banner. The incident was documented as early as 1260.

In fact, the war flag of the Holy Roman Empire during the Crusades was a silver cross on a red field quite similar to the later Austrian arms. This sign was used by the Austrian capital Vienna from the late 13th century onwards.

Let us know in the comments section below if you managed to solve the Worldle today and if there are any other games you want us to cover. Click here for the hints and the answer to Worldle 312!