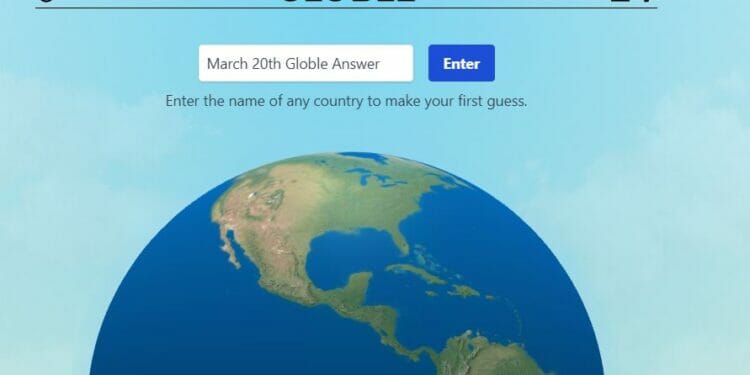 A new day, a new Globle to complete. Here are our hints and the answer for the March 20th Globle mystery country.

We’ve gone from daily word puzzles to music games pretty quickly. Wordle’s success has spawned a plethora of different puzzles, all of which have been well received, with Twitter being flooded with daily results for each game.

From what we’ve seen, Quordle, Heardle, and Nerdle are the most popular games behind Wordle. However, Globle is starting to grow a lot quicker now that people are finding out about the game.

If you’ve never played before, Globle assigns players the task of determining the daily “mystery county.” The game allows players an unlimited number of attempts, but the more attempts you make, the lower your score will be when you finally guess the country.

infinite number of attempts, attempting to figure out the answer can be quite frustrating. As a result, we provide daily hints for Globle in addition to the answer. Here are our hints, as well as the solution to the March 20th Globle.

Although unlimited guesses are nice, it can still be difficult to guess the mystery country at times. As a result, we offer our own hints, which you can find for the March 20th mystery country below:

If you’re still struggling or just want to know the answer to the Globle released on March 20th, 2022, the answer is Hungary!