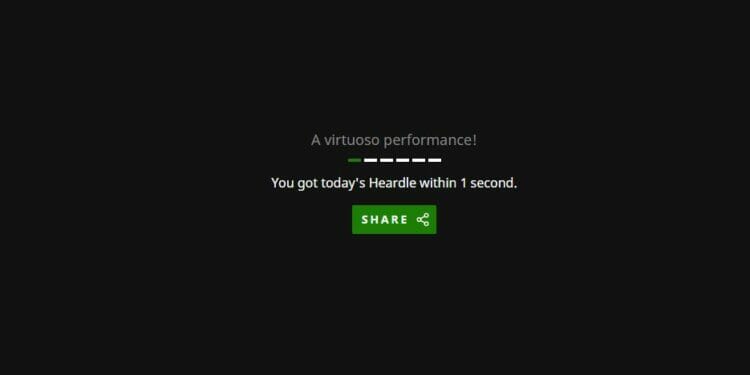 A new day, a new Heardle. Here are a couple of hints along with the answer to Heardle 12, released on March 9th, 2022.

More and more players are either moving away from the daily Wordle or finding other words to play once they’ve completed the game created by Josh Wordle in October 2021. A new game that’s currently in peoples daily routine is Heardle.

Heardle was released at the end of February and went viral a few days after launch. Not only have celebrities posted their Heardle score much like Wordle, companies including Spotify have posted their score.

If you’re new to the game, in order to play, you’ll need to navigate your way to the official site. There’s a play button at the bottom of the site, which will play the first part of the song. You can then either decide to make a guess or skip at the cost of an attempt.

You’ll need to guess the song of the day within six attempts. Some songs can easily be guessed with the first clip, others will require more of the song in order to correctly guess it. Once you’ve played Heardle for the day, there’s a countdown when the next song will be available, which appears to be midnight local time.

There’s a new song that’s been released on March 9th, 2022, Heardle 12. Here’s a couple of hints if you’ve finding today’s daily song difficult along with the answer if you’re really struggling.

UPDATE: Heardle 13 March 10th Hints and answers can be found by clicking HERE

If you still can’t guess the daily Heardle song, shame on you. The answer for Heardle March 9th, 2022 is Outkast Ms. Jackson.

Co-founder, Writer and Social at Fortnite Insider. You can find Yousef occasionally writing articles and managing the Fortnite Insider Twitter account (@Fortnite_BR). As well as running Fortnite Insider, Yousef also has a handful of other successful ongoing projects and likes to keep busy. He plays FPS and BR games, mainly Fortnite of course, in his spare time. Yousef is always on hand 24/7 to break the latest news. Second-class upper-division (2:1) bachelor's with honours degree in Creative Computing. Contact: Yous[email protected] Twitter: @YousBusiness