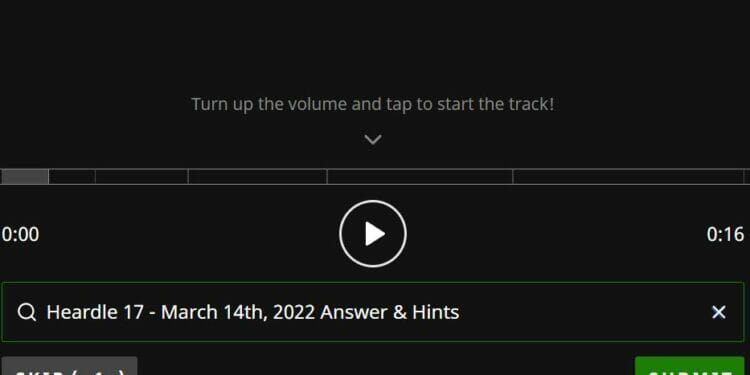 A new day, a new Heardle to complete. Here are some hints along with the answer to Heardle 17, which was released on March 14th, 2022.

Twitter users have recently been posting a list of daily games on their to-do lists. It’s no surprise that Wordle is at the top of the list for the most part, but there are always new games being replaced or added.

Quordle is probably the most popular word game after Wordle, and Nerdle is the only daily math game available right now, as far as I’m aware. Nerdle has recently added more game modes, with a total of five available on the site, the most recent of which is the speed Nerdle.

There are more unique games releasing now with their own spin on Wordle, and Heardle has quickly become one of the most popular. Players are tasked with guessing the daily song, with a short clip to get them started.

A new Heardle is available at midnight local time, and once you’ve completed the daily song, you’ll see a countdown at the bottom of the site. If you’re stuck on Heardle 17, which was released on March 14th, 2022, we’ve got some hints and the solution below.

Update: The answer to Heardle 18 can be found HERE.

Here’s a couple of hints for the March 14th Heardle:

If you’re still struggling to guess the Heardle 17, released on March 14th, 2022, the answer is Lizzo – Truth Hurts.