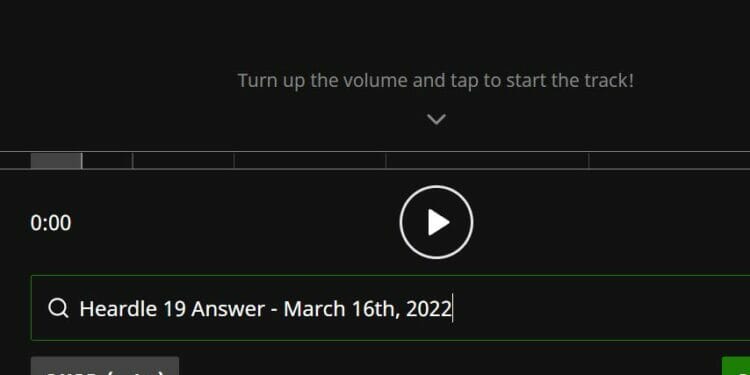 A new Heardle is now available. Here are our hints and tips for Heardle 19, released on March 16th, 2022.

Heardle is one of the most popular games inspired by Wordle, the popular word game that went viral at the beginning of the year.

If you’re new to the game, players need to guess the daily song. There’s a short clip of the song that’s available to start with. Each incorrect or skipped guess will unlock more of the song. The more of the song you need to listen to, the worse your score will be.

Similar to all the popular word games, once you’ve completed the daily Heardle, you’ll have the option to share your score on Twitter. The game has grown for popular artists and streaming platforms sharing their scores on social media.

There’s a new Heardle available at midnight local time. However, you can change the time on your phone if you want to play a new game earlier. For those struggling with the March 16th Heardle, we have a couple of hints followed by the answer below.

UPDATE: Heardle 20 – March 17 hints and answer can be found by clicking HERE.

For some songs, no matter how much of it you listen to, it can still be difficult to guess if you’ve never heard it before. For that reason, we have a few hints to hopefully help you out.

Heardle is completely random when it comes to which song is selected. You could have a song from the 80s or one that’s been released in the past couple of years. Either way, it’s much more difficult to keep your streak going.

That’s why we provide our daily hints, but if you still have no idea what today’s Heardle could be, the answer to Heardle 19, released on March 16th, 2022, is Childish Gambino – Redbone.