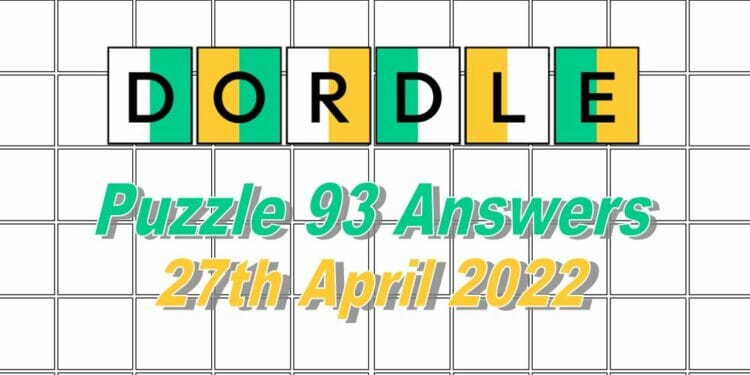 UPDATE: Click here for the hints and the answers to Dordle 94!

Some Dordle puzzles may be more difficult to solve than others, so here are some hints we have to help you solve the Dordle #93 words today.

Hint 1: There is are two common letters in the Dordle words today which are L and E.
Hint 2: There are two vowels in both words today.
Hint 3: The first word begins with a B and the second one begins with an L.
Hint 4: The first word is the area on the outer surface of a ship’s hull where the bottom curves to meet the vertical sides. The second Dordle word is a person or thing that lays something.

Here is how I managed to solve the words for Dordle 93 today. First I guessed the word ‘AUDIO’, which was a good guess as it showed me that there is an I in the first word and an A in the second. I then wanted to use a word that contains letters I have not guessed yet to see if they are in the answer so I guessed the word ‘BLERT;.

This was a great guess as it placed the B in the correct position as well as showing me there is an R in the second. There is also an L and E in both words, which have not been placed correctly for either word.

I know know where the E in placed in the second word and I also know there is an A, L and R in the word as well. The next word I guessed were ‘LACER’ and ‘LAXER’ neither of which are the answer.

I did manage to guess the answer to the second word of Dordle 93 in my next guess (luckily), which is…

Well done if you managed to guess one or two of the words correctly! Click here for the hints and the answers to Dordle 94!