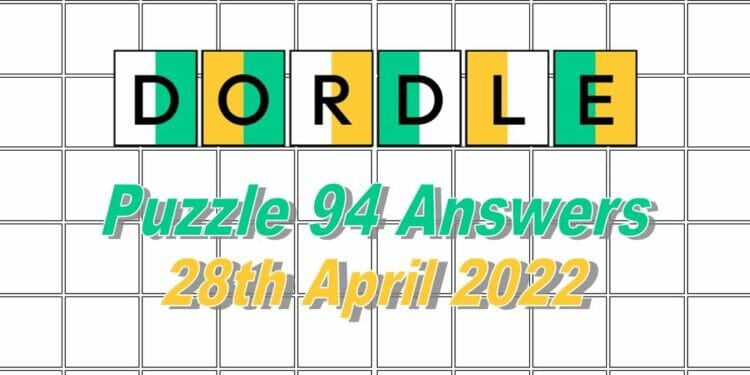 UPDATE: Click here for the hints and the answers to Dordle 95!

Some Dordle puzzles may be more difficult to solve than others, so here are some hints we have to help you solve the Dordle #94 words today.

Hint 1: There is are two common letters in the Dordle words today which are E and A.
Hint 2: There are two vowels in both words today.
Hint 3: The first word begins with a V and the second one begins with an O.
Hint 4: The first word is an employee (as of a hotel or a public facility) who performs personal services for customers. The second Dordle word is a very large expanse of sea, in particular each of the main areas into which the sea is divided geographically.

Here is how I managed to solve the words for Dordle 94 today. First I guessed the word ‘AUDIO’, which was a good guess as it showed me that there is an A in both word and there is also an O in the second word.

I then guessed the word ‘BLERT’ as the letters in this word have not been used in the previous word. This was a great word to guess as it placed the E correctly in the second word as well as placing the T in the correct position. It also showed me that there is an E and L in the first word, but they have not been placed correctly.

The next word I guessed was ‘LEAPT’ as this places the known letters in a different position for the first word. Unfortunately, this did not place any letters correctly nor did it reveal any other letters in the words.

I then guessed the word ‘SCALE’ to see if it would place or reveal any letters in either word. It placed the C correctly for the second word which helped me to guess the answer to the second word of Dordle 94, which is…

This also showed me that the A must be the second letter of the first word and that the E was the fourth letter. This helped me to guess the answer to the first word of Dordle 94, which is…

Well done if you managed to guess one or two of the words correctly! Click here for the hints and the answers to Dordle 95!