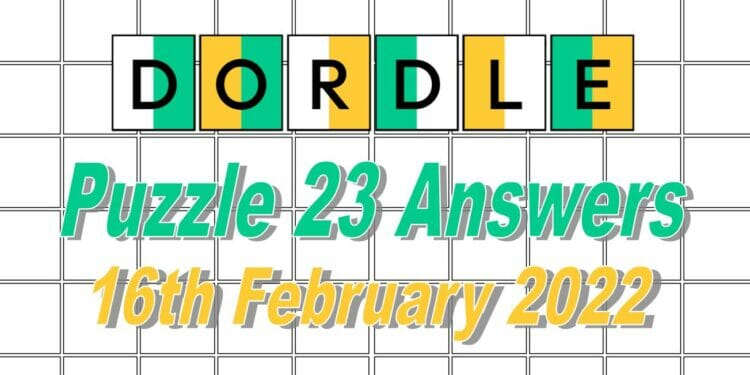 UPDATE: CLICK HERE FOR THE HINTS AND ANSWERS TO DORDLE 24!

Dordle is a fairly new game and it is one of the games that has been inspired by Wordle. This game is a lot harder than Wordle though as the aim of the game is to guess the two five letter words side by side by making the same guesses. Wordle gives you a maximum of six guesses for one word and Dordle gives you a maximum of seven guesses for both words. Once you have guessed a word correctly, all subsequent guesses are just shown on the side of the board where you haven’t guessed the word yet.

At the moment, Dordle is still being worked on by the developer and there are changes that are made where necessary, but there are a few changes that could be made to make it a bit better. At the moment, players are able to clear the board by refreshing the page, meaning they could have more than seven tries and basically cheat. Although that would take the enjoyment out of the game, there are some people that want to show they get it in fewer tries and it takes away from the experience when you share your results on social media.

A new Dordle is released every day at midnight in your time zone and we like to give players some hints to help them figure out the Dordle words of the day before giving the answer. Be sure to scroll slowly if you don’t want the answer straight away. Here are the clues for Dordle 23 today.

I started off today’s Dordle by guessing the word ‘GREAT’, which was a great guess to be fair as it showed me that there is an R and A in the first word, which has been placed in the right place and that there is an E and A in the second word, just not in the positions they are currently in. The second word I guessed was ‘BLAME’ which placed the B in the correct position for the first word and showed that there was an L in the second. Now I knew three letters for the first word, so I managed to guess the first Dordle 23 word, which is…

Well done if you guessed those words correctly! The hints and answers for Dordle 24 are out now, which you can see by clicking on the link below: