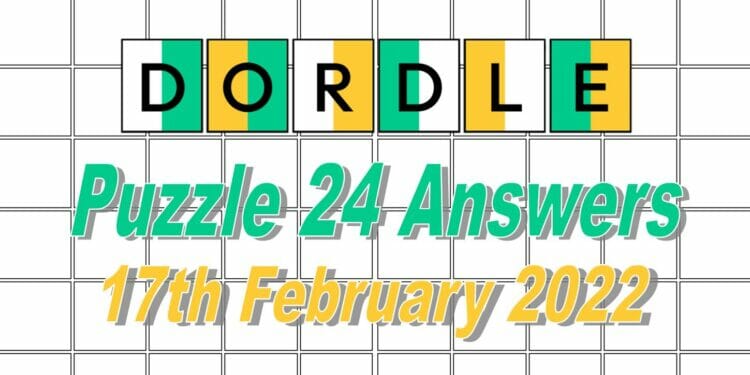 UPDATE: CLICK HERE FOR THE HINTS AND TIPS FOR DORDLE 25!

Everyone by now must of heard of the viral game Wordle, even if they haven’t played it they know what it’s about but have you heard of a game called Dordle? This is a fairly new game which is inspired by Wordle but instead of guessing one five letter word, you need to guess two. There are a maximum of seven guesses for this game instead of six for Wordle, so there is some room for error, but of course the sooner you guess one of the words, the better!

The creator of Dordle is constantly making changes to improve and has just updated us with the following:

For Dordle 24, I started off with the word ‘CREAM’ which didn’t hit any letters for word one but was a great guess for the second word as I had placed the R in the correct place and there is also an E and an A in the word, just not in the same order I had them in. I then decided to focus on the second word and made a guess which was the answer for the Dordle 24 word 2 which is..

This also showed that there was a G in the first word, but not in the correct place. The only vowels that I hadn’t tried were I, O and U so I decided to do for the word ‘DOUGH’ as it has an O and U in it and the G would be put in another position. This guess showed that there was a U in the word and it was placed correctly, but the G was still in the wrong place. From the placement of the U, it didn’t seem like there would be an I in the word so I thought of words that had a U and a G in it and figured it must end in ‘UNG’ so I guessed ‘SLUNG’. This was a great guess as it placed the last four letters in the correct place and so I only had to change the first letter to get the first word for Dordle 24 which is..

Well done if you guessed both of the Dordle words correctly! Remember we will be covering the hints and answers to all the Dordle puzzles, so make sure you come back daily if you need any help!