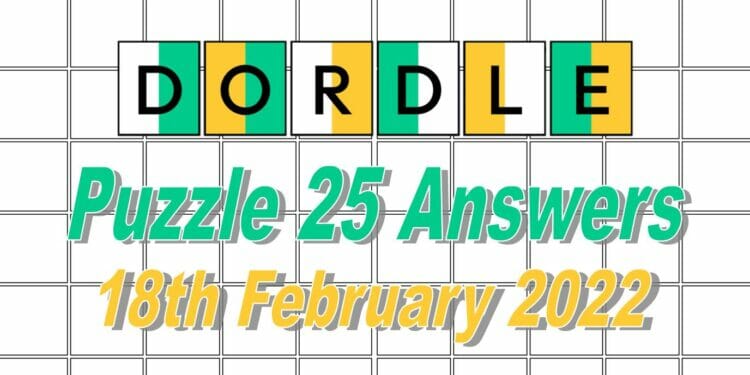 Here is the answer and some hints for the Dordle words for #25 today, released on February 18th 2022.

UPDATE: CLICK HERE FOR THE ANSWERS AND HINTS FOR DORDLE 26!

Dordle is a harder version of Wordle as this game requires you to guess two five letter words side by side as opposed to just one. Every guess you make for one word, will also count as a guess for the second word, which means you have to make your words count! Wordle only has a maximum of six guesses to solve the word, but Dordle have given an extra one in which you have to solve both of the words, which is why it is so tricky!

Dordle can be found on the https://zaratustra.itch.io/ website (or you could just click here) and there are changes that are constantly being made to the game by the developer. There are some changes we would like to see happen which we have mentioned in previous articles, but one we hadn’t mentioned before is that it would be great if a more solid line was added in the middle to make the distinction between the two words more noticeable.

As usual, we will be giving you hints to help you solve both the Dordle words if you are struggling. Here are the clues we have for Dordle 25 today.

Here is how I got to the Dordle 25 answers today. First I guessed the word ‘FOUND’ which unfortunately wasn’t the best guess for the Dordle words today as it only showed that I had placed the D in the right place in the first word but no letters at all were hit in the second word. I decided to focus more on the first word and guessed the word ‘PILED’ which was a great guess! This word placed the I in the correct place and it also showed there was an L and and E in the Dordle first word today. The next guess I made was the answer to Dordle 25’s first word which is…

I now knew there was a P and E in the second word, so I decided to guess the word ‘SLEPT’ even though I realised after I had guessed the word that I should have guessed a word without an L in it as I already knew there wasn’t one in the second Dordle word today from the last guess. This guess did however show me that there was a P somewhere in the word and looking at the letters I had, I made the next guess which was the second answer for the Dordle 25 puzzle which is…

Well done if you guessed both of those words correctly!