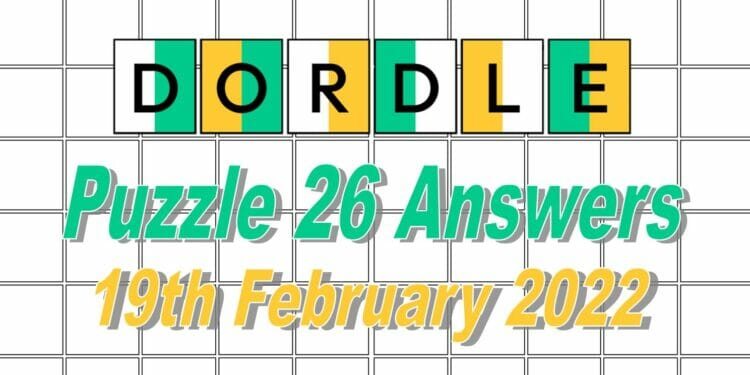 Here is the answer and some hints for the Dordle words for #26 today, released on February 19th 2022.

UPDATE: CLICK HERE FOR THE HINTS AND ANSWERS TO DORDLE 27!

If you like Wordle and find it quite easy, you might want to try Dordle, which is essentially Wordle, but with two words. Players are given a grid where you see two words are meant to go side by side and the guesses you make are put under both sides. This game makes players think more as they need to solve two words in seven guesses or less, so they will have to be more selective with their guesses.

There is a new Dordle puzzle released every day at midnight in your time zone and we will be covering the answers for the puzzles yet to be released along with hints to help you solve the Dordle words if you are struggling.

As usual, we will be giving you hints to help you solve both the Dordle words if you are struggling. Here are the clues we have for Dordle 26 today.

Hint 1: There is only the letter O that is common in both Dordle words today.
Hint 2: Both words have two vowels but it’s the same vowel in the first one (just appears twice) whereas the second word has different vowels.
Hint 3: The first word begins with a S and the second on begins with an E.
Hint 4: The first word means to leave quickly or slide whilst sitting and the second word is a heavy blackish or very dark brown timber from a mainly tropical tree.

So here is how I figured out the answers to Dordle 26 today. I started off by guessing the word ‘TEASE’ and this showed me that there was a T  and an S in the first word and an E in the second word although all of these letters were not placed in the correct positions. I then decided to focus on the first word as I didn’t know any of the vowels in the word and guessed the word ‘STOUT’ to see if there was an O and U in the word. This was a great guess as I placed both the S and the T in the correct positions and I now knew there was an O in the word, but not U’s which meant there was a possibility of another O being in the word so I decided to guess a word with a double O in it was the answer to the first word of Dordle 26 which is..

For the second word, I knew where the O was in the word and also knew there was an E, but did not yet know where it was located. If the O was in the middle, chances are the E could be near the beginning or right at the end so I decided to guess the word ‘PHONE’. This guess placed the N in the correct place but the E was still not placed in the right spot, which means it might begin with E. My next guess was the answer to the second word of Dordle 26 which is..

Well done if you managed to guess both words correctly!