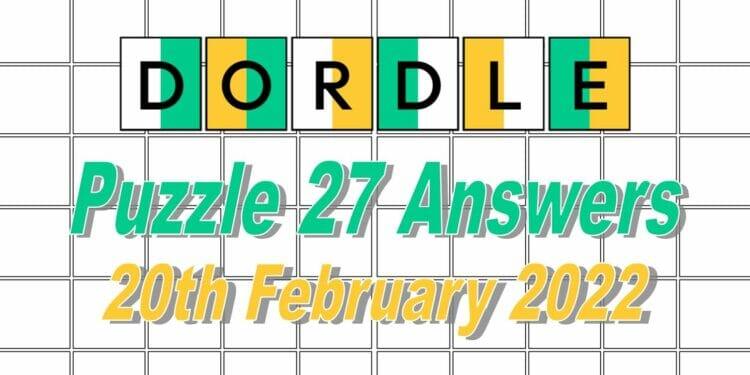 Here is the answer and some hints for the Dordle words for #27 today, released on February 20th 2022.

UPDATE: CLICK HERE FOR THE HINTS AND TIPS FOR THE NEW DORDLE 28 PUZZLE!

Wordle is a very popular game where players need to guess the five-letter word of the day in six guesses or less and there have been many other games that have launched after which have been inspired by Wordle. One of these games is Dordle where players need to guess not one, but two five-letter words side by side in seven guesses or less, which makes it a lot harder than Wordle. Don’t worry though because we are here to help!

Here are the hints we have to help you solve the daily Dordle 27 today.

Now for the second word of Dordle today. There are so many letters that I can see that aren’t in the word as the letters have been greyed out at the bottom and I also know there is an N in the fourth place and an A and L in the word, but the positions of these letters are not known to me. I decided on a word using the letter I hadn’t used and managed to get it on my next guess so the second answer to the daily Dordle 27 is…

Well done if you guessed those words correctly! We will be back tomorrow with the answers and hints to the new Dordle puzzle so make sure you come back if you get stuck.