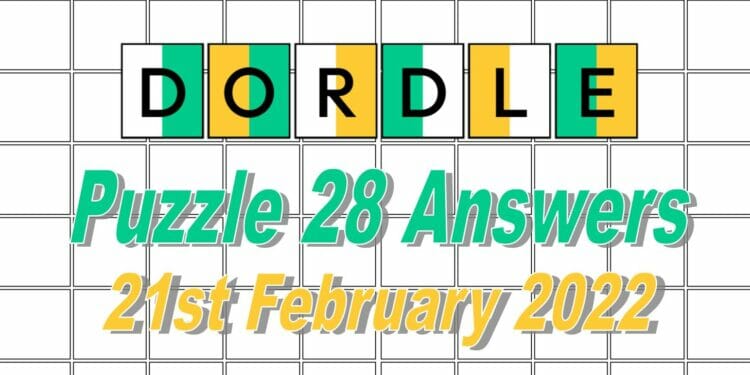 Here is the answer and some hints for the Dordle words for #28 today, released on February 21st 2022.

UPDATE: CLICK HERE FOR THE HINTS AND ANSWERS TO DORDLE 29!

Dordle is the harder version of Wordle as the aim of the game is the same, but instead of guessing one five-letter word, you need to guess two side by side. This means that the guesses you make count as a guess for both words and you will have a maximum of seven guesses to solve both of the Dordle words.

The developers of the game are constantly making changes to the game where necessary and we think there are a few changes that need to be to make the game more appealing. It would be great if they could add a win streak feature to the game, similar to Wordle, and also make sure that when you refresh the page, you will not be able to play the daily puzzle again. It would also be nice to get a differentiation between the two words you are guessing as there is no clear divide. A new Dordle puzzle is released every single day at midnight in your time zone as we will be here to help you with hints and the answers for both words.

As usual, we will be giving our readers some hints for the puzzle and here are the hints we have to help you solve the daily Dordle 28 today.

I started of today’s Dordle puzzle by guessing the word ‘URINE’. This showed me that there was an R in the first word, but not in the right position and that the I and E were placed in the right spots for the second word and there is also a U. As there were no correct vowels guessed for the first word, I thought it would be best to think of a word that had an R in a different position and also an O and and A in the word so I decided to go for the word ‘ROADS’. This showed me that there was an O in the first word, but not positioned in the correct place and that the word did not start with an R.

Now back to the first word, which I now knew starter with the letter G and had an O and an R in it. The word that came to my head jsut so happened to be the answer for the first word of the Dordle 28 which is…

Well done if you guessed both of the Dordle words correctly today! Make sure you come back tomorrow for the new hints and answers for Dordle.