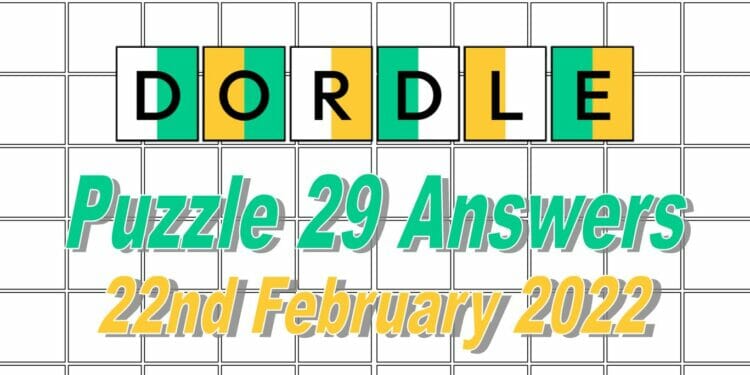 Here is the answer and some hints for the Dordle words for #29 today, released on February 22nd 2022.

UPDATE: CLICK HERE FOR THE HINTS AND ANSWERS TO DORDLE 30!

Dordle is the harder version of Wordle as you need to guess two five-letter words at a time and every guess you make counts towards both words and there are only seven guesses you can make. The rules are the same where you have to guess actual words in the American English language and the tiles will change colour to show you if you have guessed the right letters and if they are in the correct place.

As usual, we will be giving our readers some hints for the puzzle and here are the hints we have to help you solve the daily Dordle 28 today.

Looking at the second word, I thought maybe there was a double R so I decided to guess ‘FERRY’. This showed me there was a Y at the end, but no double R and for some reason I guessed ‘PEERY’ even though I knee there wasn’t an E in the second place. This did however show me that there was another E, which meant the word had to start with it and the first word that came to mind was ‘EVERY’. This unfortunately wasn’t the answer, but I did manage to get it on the last guess which is..

Well done if you guessed them both correctly! We will be back tomorrow with the answer to the new Dordle puzzle so make sure you come back if you need any help!