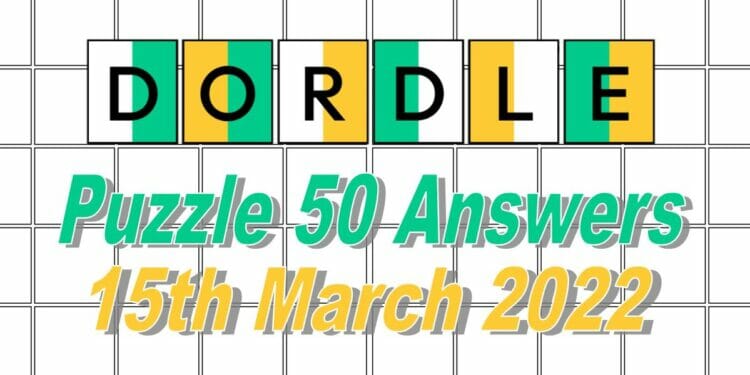 UPDATE: Click here for the hints and answers to Dordle 51!

The rules for the game are the same where the guesses you make help you to reveal or eliminate more letters in the word as the colour of the tiles will change to let you know if the letter appears in the word and if you have it in the correct position.

There may be puzzles that are a little harder to solve so here are some hints we have to help you solve the Dordle #50 words today.

Here is how I solved the answers to Dordle 50. I started with the word ‘AUDIO’ as usual and this showed there is an A in both words and even places it in the correct position for the second word. I then wanted to see if there was an E in either of the words and if I could place the A in the first word in the correct position, so I went with the word ‘BARGE’ as my next guess.

This was a great guess as it placed the B and E correctly in the first word and also showed me there was an R in the word. For the second word, it placed the L, R, and the other A in the correct positions, and guessing another A would not have been something I would have guessed straight away, so that was very helpful.

Looking at the second word, I practically had the word already as I knew it started with ‘ALAR’ which meant the answer to the second word in Dordle 50 is…

Now looking at the first word, I know it begins with a B and ends in an E. I also know there is an R and A in the word, but do not know exactly where they are positioned. As the A is not the third letter, it is more than likely the second and I know the R is not in the fourth position so that just leaves it as the third letter. Using this information, I did manage to guess the answer to the first word of Dordle 50 on my next guess, which is…

Click here for the hints and answers to Dordle 51!