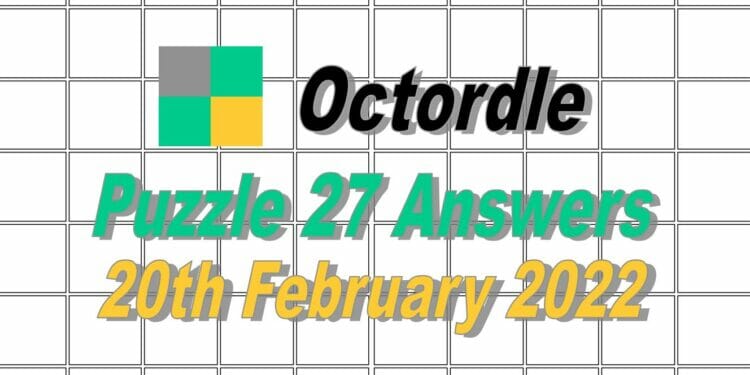 Here is the answer and some hints for the Octordle words for #27 today, released on February 20th 2022.

UPDATE: CLICK HERE FOR THE ANSWERS AND HINTS TO OCTORDLE 28

Octordle is a fairly new game that has been released and this game was inspired by Wordle, Dordle and Quordle. Wordle is a viral game where players need to guess the five-letter word in six guesses or less with the only clues being in the guesses themselves. The tiles the letters are in change colour to show you if they are in the letters appear in the word or not and if you have positioned them correctly. This helps you to solve the word of the day by eliminating certain words based on the letters that don’t appear in the word based on the guesses you have made.

We like to give our readers some hints as to what the Octordle words are before giving the answer, so here are the hints we have for the Octordle 27 words.

Hint 7: Here is a little description of all of the words:

Now here are all of the eight answers for Octordle 27:

You can see how I came to the answers today in the screen shots below:

Well done if you guessed them all correctly! This game is a lot harder than Wordle that’s for sure!