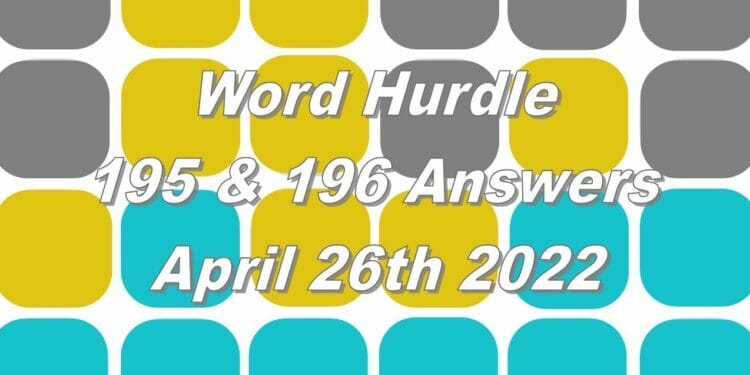 UPDATE: Click here for the hints and the answer to Word Hurdle 197 and 198!

Here are some hints we have for Word Hurdle 195 to help you to complete the word for today.

Hint 1: Contains the letter C.
Hint 2: It starts with the letter S.
Hint 3: There are two vowels in the word today (one letter repeated).
Hint 4: Not known or seen or not meant to be known or seen by others.

Here is how I managed to solve the answer to Word Hurdle 195 in five guesses today. I guessed the word ‘AUDIOS’ first (as per usual), which wasn’t the best word for today as it only showed me that there is an S in the word. I figured that this means there must be more than one E in the word, so guessed the word ‘PEELER’ to see how many there are.

This was a great guess as it placed two out of the three E’s correctly as well as showing me there is an R in the word. The next word I decided to guess to see fi I could reveal more letters is the word ‘RESTER’.

This was a great guess as it placed the S correctly as well as showing me that the T must be the last letter. I placed the R and the fourth letters, leaving only the third letter to be guessed, which I managed to do in my next guess to solve the answer to Word Hurdle 195, which is…

Here are some hints we have for Word Hurdle 196, released in the afternoon of April 26th, to help you to complete the word for today.

Hint 1: Contains the letter V.
Hint 2: It starts with the letter R.
Hint 3: There are there vowels in the word today (one letter has been repeated).
Hint 4: To uncover a secret or information that was previously unknown.

Here is how I managed to solve the answer to Word Hurdle 196 in six guesses today. I guessed the word ‘AUDIOS’ first, as usual, which only showed me that there is an A in the word, but it has not been placed correctly in the word. I then guessed the word ‘TREATY’ as this would place the A in a different position, uses an E and also different letters that have not been guessed yet.

This was a good word to guess as it showed me that there is an R and E in the word, but none of the letters have been placed correctly. I wanted to guess a word that uses different letters again and also places the know letters in different positions, so I went with ‘PLANER’.

Unfortunately, none of the letters were placed correctly again, but it did reveal that there is an L in the answer. I then decided to see if I could place the L and E as well checking to see if there is a W or H in the word with the word ‘WHEELS’.

This word showed me that there are two E’s in the word, which is not what I was expected but it did place one of the E’s correctly. The next word I decided to guess is ‘EARNER’ to see if the word starts with an E and if I could place the R.

Unfortunately none of these letters were placed correctly and as I was now on my last guess, I had to be very careful. The word surely has to begin with an ‘RE’ and the A must be placed after the E. This would mean that the L is either the third or last letter and when I placed the L as the last letter, I managed to guess the answer to Word Hurdle 196, which is…

Well done if you managed to guess one or both of the Word Hurdle words correctly today! Click here for the hints and the answer to Word Hurdle 197 and 198!