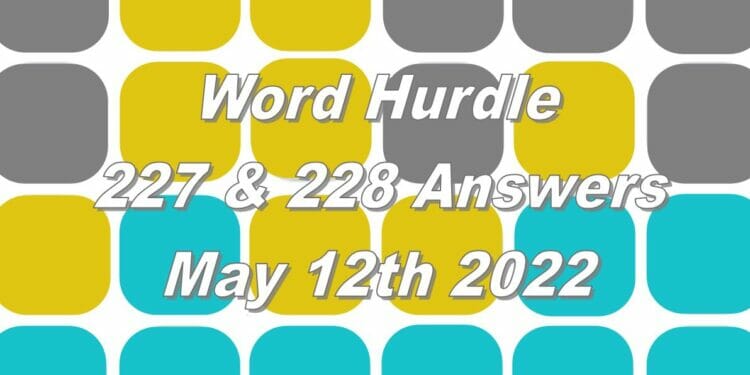 UPDATE: Click here for the hints and the answers to Word Hurdle 229 and 230!

Here are some hints we have for Word Hurdle 227 to help you to complete the word for today.

Here is how I managed to solve the answer to Word Hurdle 227 in six guesses today. I guessed the word ‘AUDIOS’ first, as usual, which only showed me that there is an A in the word but it has not been correctly placed.

I then guessed the word ‘PLANER’ as it uses different letters than the ones guessed and it also puts the A in a different position. This was a good guess as it showed me that there is an E and N in the word, none of which have been placed correctly in the word.

I wanted to guess a word that places all the known letters in different positions and has different letters in it. The only word I could think of was the word ‘HANDLE’ and I know this can’t be the answer as I already know there is no D in the answer. This word placed the N in the correct position, but did not reveal any other letters.

‘ENACTS’ was the next word I guessed and this word unfortunately did not place any letters, but it did show me that there is a T in the answer. I then went for the word ‘MENTAL’, which placed the E correctly.

The A must be the fourth letter in the word and I figured that the word probably started with a T. Placing these letters helped me to solve the answer to Word Hurdle 227 in my final guess, which is…

Here are some hints we have for Word Hurdle 228, released in the afternoon of May 12th to help you to complete the word for today.

Hint 1: Contains the letter L.
Hint 2: It starts with the letter S.
Hint 3: There are two vowels in the word today.
Hint 4: Used to indicate obligation, duty, or correctness, typically when criticizing someone’s actions.

Here is how I managed to solve the answer to Word Hurdle 228 today in four guesses. I guessed the word ‘AUDIOS’ first (as per usual), which was a great word to guess today as it showed me that there is a U, D, O and S in the word, none of which have been placed correctly though.

I then guessed the word ‘DOUSER’ as this places all the known letters in a different position. Unfortunately, none of the letters were placed correctly in this word and no new letters were revealed.

It was possible that the O and U are the third and fourth letters in the word and so I guessed the word ‘STOUND’ next. This was a great word to guess as it placed the S, O, U and D all in the correct positions.

This meant that there were only two letters left to guess, the second and fifth letters, and I was then able to solve the answer to Word Hurdle 228 in my next guess, which is…

Well done if you managed to guess one or both of the Word Hurdle words correctly today! Click here for the hints and the answers to Word Hurdle 229 and 230!