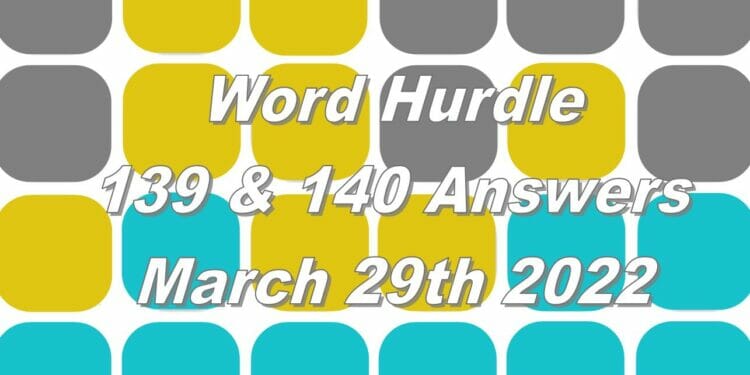 UPDATE: Click here for the hints and answers to Word Hurdle 141 and 142!

There has been another change that has been made to the game. Previously you would see the full 6 x 6 grid where you would fill more of the grid with the more guesses you make. This has been changed now as you only see one row when you launch the game and more rows are revealed if and when you need them. This could have been seen as a hindrance for some as they may lose count of how many guesses they have made so far and keep guessing without realising it’s their last guess. They have now added a new line at the top which shows you how many guesses to have left so this is no longer an issue.

If you type in wordle2.in, which was the previous URL for the game, it will redirect you to the new one, which is wordhurdle.in. Unfortunately due to this change, the statistics for the game have been reset and there is no way of forwarding your progress to the new game. There are still two words released every day and we cover both answers for March 29th, 2022 in this article, so make sure you scroll slowly to avoid seeing any spoilers for the afternoon word.

Here are some hints we have for Word Hurdle 139 to help you to complete the word for today.

Hint 1: Contains the letter M.
Hint 2: It starts with the letter S.
Hint 3: There are two vowels in the word today.
Hint 4: A small, narrow river.

Here is how I managed to guess the answer for Word Hurdle 139 today. I started with the usual starting word, which is ‘AUDIOS’ and this showed me there is an A and S in the Word Hurdle today. I then decided to guess the word ‘SHEATH’ as it places the known letters in a different position as well as using letters that have not previously been guessed. I also wanted to see if there is an E in the word.

This word placed the S in the correct position as well as showing me there is an E and T in the word, although none of these letters were placed correctly. I then guessed the word ‘SAKTER’ as it places all known letters in a different position but unfortunately it didn’t place any correctly but did reveal another letter in the word, an R.

This helped me to guess the answer to Word Hurdle 139 in my next guess, which is…

Here are some hints we have for Word Hurdle 140, released in the afternoon of March 29th, to help you to complete the word for today.

Hint 1: Contains the letter V.
Hint 2: It starts with the letter S.
Hint 3: There are three vowels in the word today.
Hint 4: An elected governmental council in a Communist country.

Here is how I managed to guess the Word Hurdle 140 today in four guessed. The first word I guessed was ‘AUDIOS’ which was a good guess for the word today as it placed the I in the correct position in the word as well as showing me there is an O and S in the word. From this information, I decided to guess the word ‘LOSING’.

Well done if you managed to guess these words correctly! Click here for the hints and answers to Word Hurdle 141 and 142!