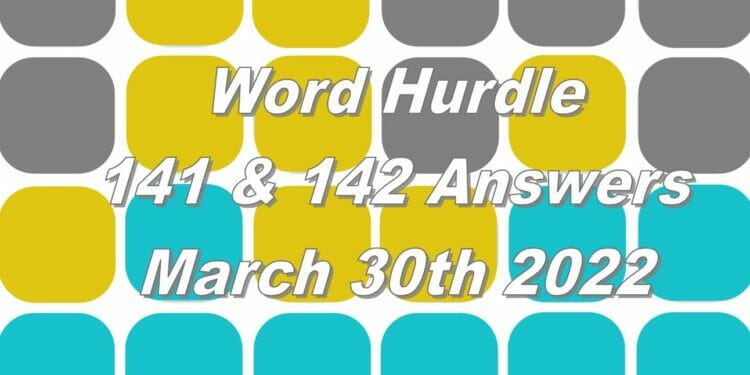 UPDATE: Click here for the hints and the answers for Word Hurdle 143 and 144!

It looks like another big change has been made to the design, probably to distinguish it more from the original Wordle, and I have to say, I hope they change it as I think this design is very ugly. Now it shows you all the rows for the guesses you have but the grid is plain and boring.

So many changes have been made to Word Hurdle since they have been contacted by the New York Times, but as changes are still being made, I do hope they are able to come up with something that is more appealing. They have kept the number of chances you have at the top of the page, but this isn’t really needed now they have changed the grid as it shows the amount of guesses player have left. There are still two words released every day and we cover both answers for March 30th, 2022 in this article, so make sure you scroll slowly to avoid seeing any spoilers for the afternoon word.

Here are some hints we have for Word Hurdle 141 to help you to complete the word for today.

Hint 1: Contains the letter N.
Hint 2: It starts with the letter F.
Hint 3: There are two vowels in the word today.
Hint 4: A person who has a strong liking for and trust in another person.

Here is how I managed to guess the answer for Word Hurdle 141 today in three guesses. I first guessed the word ‘AUDIOS’ which showed me there is a D and I in the word today. I then decided to guess the word ‘FRIDAY’ as it changes the positions of the known letters. I know it would not be the answer though as I already know there is no A in the word.

This was a great guess though as it placed the F, R, and I all in the correct positions. I then thought that the word could end in a D, which would only leave two letters for me to guess. I managed to guess the answer to Word Hurdle 141 in my next guess, which is…

Here are some hints we have for Word Hurdle 142, released in the afternoon of March 30th, to help you to complete the word for today.

Hint 1: Contains the letter C.
Hint 2: It starts with the letter R.
Hint 3: There are two vowels in the word today (one letter repeated).
Hint 4: An event or occasion which has just happened not long ago.

I managed to guess the answer Word Hurdle 142 in three guesses today and the first word I guessed was ‘AUDIOS’. Unfortunately, this guess showed me no letters that are in the answer, which means there has to be an E in it, but question is how many?

I decided to guess the word ‘RECEDE’ next as it has three E’s in it even though I know it cannot be the word as I know there is no D in the answer. This guess was a good guess though as it placed the R, E, C, and E in the correct positions. This meant I only had to guess the last two letters, which made it very easy to guess the answer to Word Hurdle 142, which is…

Well done if you managed to guess these words correctly! Click here for the hints and the answers for Word Hurdle 143 and 144!