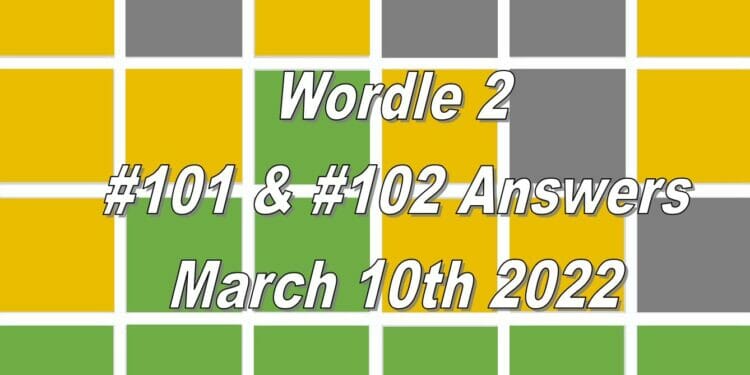 There are two words that are released daily for Wordle 2, one in the morning at midnight and the other is released midday at 12pm in your time zone. The other difference between this game the original Wordle is that the words in this game are six letters long, which makes it a bit more difficult to guess the word as you only have six tries, the same as Wordle.

We will be giving you the hints and answers for both the words released on March 10th 2022 so be sure to scroll slowly if you do not want to spoil the second word of the day if it has not yet been released where you are! We will be covering all the answers to this game going forward, so you can keep coming back if you need any help!

Here are some hints we have for Wordle 2 #101 to help you to complete the word for today.

Hint 1: Contains the letter T.
Hint 2: It starts with the letter M.
Hint 3: There are two vowels in the word today, none of which are repeated.
Hint 4: A boys name.

Here is how I came to the answer for the first Wordle 2 word in the morning of March 10th, #101 puzzle. I first started with the word ‘REMUDA’ as this word had three vowels in it. This was a good guess as it showed me there was an R, M and A in the word. I then decided to go with the word ‘SMARTY’. Unfortunately, this did not place any of the known letters in the correct place, but I also knew that there was a T in word.

From this, I guessed the word ‘GRATIN’, even though there was no M in it as I wanted to see if I could place some of the other letters and see if I could reveal some more letters in the word. This guess paid off luckily as it placed the T, I and N all in the correct spots. I looked at the letters I had left to place in the word, which were the M, R and A and I managed to guess the Wordle 2 #101 answer, which is…

I didn’t think this word would even count as a guess as I only knew it as a name (proper noun), but the definition for martin as a noun is, “a swift-flying insectivorous songbird of the swallow family, typically having a less strongly forked tail than a swallow.”

Here are some hints we have for Wordle 2 #102, released in the afternoon of March 10th, to help you to complete the word for today.

Hint 1: Contains the letter N.
Hint 2: It starts with the letter V.
Hint 3: There are two vowels in the word today, none of which are repeated in the word.
Hint 4: The word is a person or company offering something for sale.

Again I started with the word ‘REMUDA’ to start of the Wordle 2 #102 word released in the afternoon on March 10th 2022. This guess placed the E in the correct place and I also knew there was an R and D in the word today. I then decided to guess the word ‘DECORS’, which unfortunately did not place the D or R in the correct places, but from guessing this word, I also knew there was an O in the word.

I couldn’t think of any words with the known letters at the time, so I decided to guess the word ‘CENSOR’ to see if I could reveal some more letters maybe and place some of the other known letters in the right places. Luckily this guess placed the N, O and R correctly in the word, which helped a lot!

I now knew the D had to be placed in fourth position as I had already placed it as the first letter previously and the tile was yellow. Knowing that the word ends in ‘ENDOR’ in was very easy to guess the answer to Wordle 2 #102 (evening) word, which is…

Well done if you managed to guess both the Wordle 2 words correctly today!