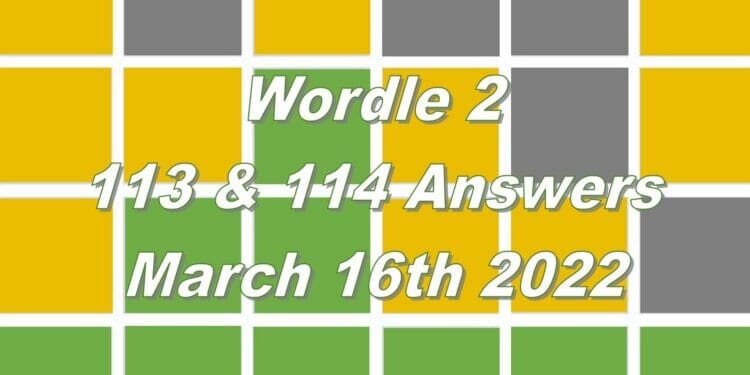 In Wordle 2, players are required to guess the six-letter words of the day and there are two released daily, one at midnight and the other at midday. The rules of the game are the same as the original Wordle where no initial clues are given to help you with the word and the tiles will change to the same colours to let you know if you have the right letters and the correct positioning.

Both of the words that have been released on March 16th, 2022 can be seen below, so make sure you don’t scroll too far if you do not want any spoilers for the next word today.

Here are some hints we have for Wordle 2 #113 to help you to complete the word for today.

Hint 1: Contains the letter G.
Hint 2: It starts with the letter T.
Hint 3: There is are two vowels in the word today.
Hint 4: This word can be used instead of saying ‘despite the fact that’.

Here is how I managed to guess the answer to Wordle 2 #113 on my third guess. I changed my starter word, which is ‘AUDIOS’ and this showed me there was a U and O in the word today. It’s more than likely that these letters will be found together in the word and I don’t think there are any other vowels in the word.

For this reason, I decided to guess the word ‘GROUND’ in the hopes of revealing more letters and hopefully placing the vowels in the correct place. Luckily, this word did place them in the right positions and also showed me there was a G in the word. I then thought that the G could be positioned next to the U, followed by a H.

This made me guess my next word, which happened to be the answer to the Wordle 2 #113 word released in the morning of March 16th, 2022, which is…

Here are some hints we have for Wordle 2 #114, released in the afternoon of March 16th, to help you to complete the word for today.

Hint 1: Contains the letter V.
Hint 2: It starts with the letter S.
Hint 3: There are two vowels in the word today (one letter repeated).
Hint 4: A person or thing that serves.

I started with my new word, which is ‘AUDIOS’, but unfortunately this word only showed me there was an S in the word somewhere. From this guess, I also knew that there had to be at least one E in the word, probably two, so I decided to guess a word that had quite a lot of E’s in it to see if I could place any in the correct position.

I went for the word ‘SEEKER’ as my next guess and this not only placed two of the E’s in the correct positions, but also the S and the R, leaving just the two middle letters to deduce. I then made two guesses, which did not place any letters, which were ‘SELLER’ and ‘SETTER’.

From the letters that were left, I thought I had to just switch up the order a bit as I was stuck on thinking the middle letters had to be the same, so I went with the word ‘SEVERE’. The showed me there was a V in the word, which would have to be the fourth letter and then the answer to Wordle 2 #114 finally came to be, which is…