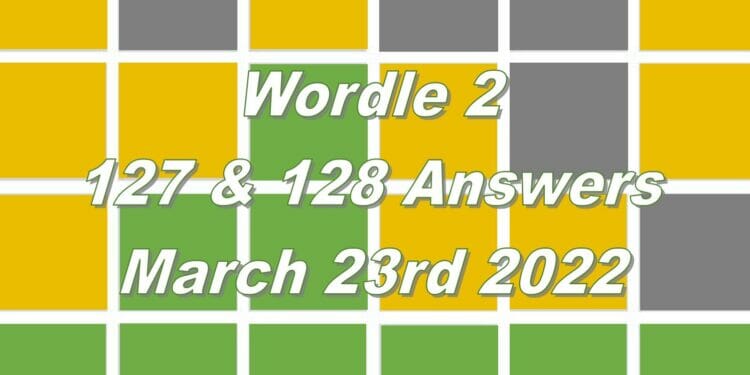 As previously mentioned, there are two words released daily, and we have the hints and answers for both words released on March 23rd, 2022 below. If you want to avoid any spoilers for the afternoon word, it’s best to scroll slowly.

Here are some hints we have for Wordle 2 #127 to help you to complete the word for today.

Hint 1: Contains the letter C.
Hint 2: It starts with the letter P.
Hint 3: There are three vowels in the word today (one letter is repeated).
Hint 4: This is somewhere where royalty would reside in.

Here is how I managed to solve the answer to Wordle 2 #127 in four guesses today. I started with the word ‘AUDIOS’ which only showed me there is an A in the word. I needed to guess a word that has an E in it and places the A in a different position so I went with the word ‘PEARLY’.

This was a great guess as it showed me that the word starts with a P and that there is an E and L in the word, although neither of these letters or the A were positioned correctly. I then guessed the word ‘PLEACH’, which placed the A and C in the correct positions, but the L and E where still not placed in the correct place. I then managed to guess the answer to Wordle 2 #127 on my next guess, which is…

Here are some hints we have for Wordle 2 #128, released in the afternoon of March 23rd, to help you to complete the word for today.

Hint 1: Contains the letter N.
Hint 2: It starts with the letter S.
Hint 3: There are three vowels in the word today.
Hint 4: Someone older or has a higher rank than you.

Here is how I guessed the answer to Wordle 2 #128 in four guesses today. I guessed the word ‘AUDIOS’ which was a great first guess for the afternoon word released on March 23rd as it placed the I and O in the correct positions as well as showing me there is an S in the word. I couldn’t think of and words with the I and O positioned in the way they are so I guessed a word that would hopefully reveal more letters.

Luckily, this word not only revealed more letters, but also placed the E, N and R in the correct positions, leaving only the fourth letter for me to fill it. This made it very easy to guess the answer to Wordle 2 #128, which is…

Well done if you managed to guess both words correctly! Click here for the hints and answers to Wordle 2 #129 and #130!