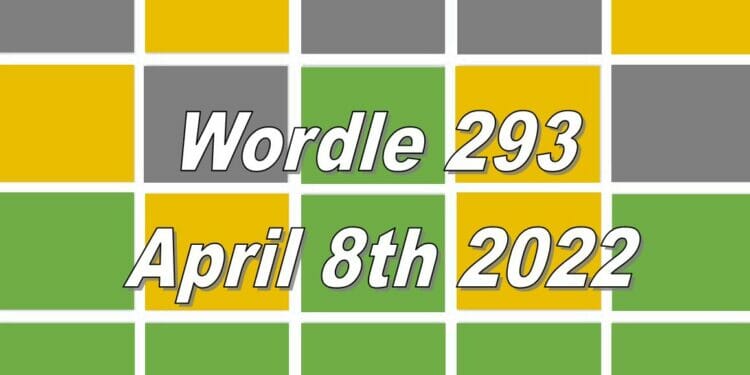 UPDATE: Click here for the hints and the answer to Wordle 294!

Wordle is a well-known word game that nearly everyone enjoys and plays! The objective of the game is straightforward: guess the five-letter word in six or fewer guesses. The word could be anything in American English, and there are no hints as to what it could be, making it appear impossible.

Some hints, however, will be revealed to you throughout the game. When you make a guess, the tiles change colour, indicating whether the letters appear in the word and if they are in the correct order. Here is a quick summary of what the colours mean:

If you have been playing Wordle for a while and you are finding it a bit too easy to guess the word, maybe you should try the ‘Hard Mode’ which can be toggled on and off in the settings. This simply forces you to use all correctly guessed letters in all subsequent answers. Give it a try and see how you get on!

As the word can be quite difficult, we have some hints for Wordle 293 to help you to solve it, which are:

Hint 1: Contains the letter R.
Hint 2: It starts with the letter S.
Hint 3: There are two vowels in the word.
Hint 4: A sudden attack of fright.

Here is how I solved the Wordle 293 answer today. First I started with the word ‘AUDIO’ and this showed me that there is an A in the word, but it has not been placed in the correct place.

I then guessed the word ‘STAMP’ which placed the S and the A in the correct place, but unfortunately did not reveal any other letters that are in the word. I then decided to guess a word that also has an E in it, so I went with the word ‘SHARE’. This was a great guess as it placed the R and E in the correct position, leaving jus the second letter to be guessed.

Some players may be tempted to start making guesses of words it could be, but as there were quite a few possibilities for the potential answer, I went with the word ‘WINCE’ as my next guess, so that I could see if the answer has a W, N or C in it.

This guess showed me there was a C in the word, which means the answer to Wordle 293 is…

You can solve the Wordle whichever way you wish, but when there is only one letter left and multiple solutions, it may pay off to guess a word that uses as many of the potential letters as possible so that you can eliminate them or find the letter you need! Click here for the hints and the answer to Wordle 294!