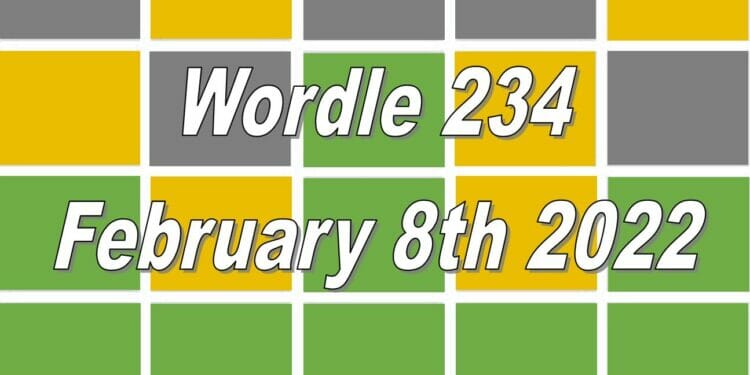 UPDATE: CLICK HERE FOR THE ANSWER AND HINTS TO WORDLE 235!

If you haven’t heard of Wordle yet, where have you been? This game is all over social media with players all around the world showing off when they have guessed the Wordle of the day correctly, without giving away the answer. The aim of the game is really simple, you have to guess the five letter word in only six guesses or less and there are no clues to help you at the start. Seems impossible until you’ve played the game and realise how it works.

The Wordle can be any word in the American English language and you can guess any word you like. Once you have made a guess, you will see the tiles will turn either green, yellow or grey and here is what these colours mean:

Using the guesses you have made, you will be able to figure out what the word will be by a process of elimination and having a knowledge of the English language and knowing where certain letters will have to be placed depending on the letters you know feature in the word.

There are many of our readers who need a little help in figuring out the word without being told the word outright so as not to lose their streak. Don’t worry, we’ve got you covered! Here are the clues we have for Wordle 234, released on 8th February 2022.

Hint 1: Contains the letter M
Hint 2: It starts with the letter F
Hint 3: There are two vowels in this word.
Hint 4: Can be used to put a picture in.

I managed to guess the Wordle in two guesses today, simply by having a great first guess. The first word I guessed for Wordle 234 was ‘IRATE’. From this word I had guess the R, A and the E in the correct positions and I knew there was no I or T in the Wordle today. Now I only had to guess the first and the fourth letters and there are a few words it could have been such as ‘BRACE’ and ‘BRAVE’ but the first word that came to my head was the correct answer for Wordle 234 which was…