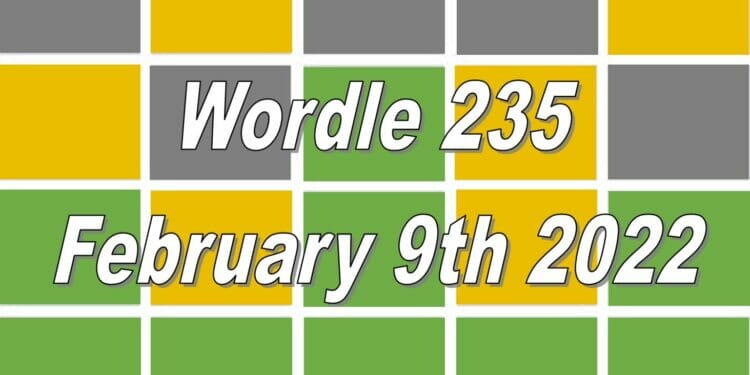 Wordle is a game that has taken the world by storm with its simple yet challenging nature making people come back for more! Players simply need to guess the five letter word of the day in six guesses or less. Seems a bit hard as there are no clues given to you at the start as to what the word will be but the clues you do get are in the guesses you make so you need to choose your words wisely!

There are many different ways you can tackle this game, but I would suggest you start with a word that has at least two vowels in it to get a solid base for the word because when you figure out the vowels in the word, it usually makes it easier to guess.

We like to give our readers some hints as to what the Wordle of the day is just in case you feel like you won’t get the word and ruin your streak or just need a nudge in the right direction. Here are the hints / clues we have for Wordle 235 today.

Hint 1: Contains the letter M
Hint 2: It starts with the letter H
Hint 3: There are two vowels in this word, not placed next to each other.
Hint 4: This word is the American spelling, so Brits keep that in mind!

For Wordle 235 I decided to start with the word ‘CRATE’, which wasn’t the best guess for the word today but at least it showed me there was an R in the word today, just not in the second place and I could rule out the A and the E as the vowels. I then figured there would be an O and a U as vowels for the Wordle and I figured they would likely be together so I decided to guess the word ‘HOURS’ to see if the R was in fourth place.

To my surprise the O and the U were in the word but not together like I had previously thought, but I managed to place the H in the correct place and the R was still not in the correct place. What I did know what that the word has to start with ‘HU’ because there is no word I can think of that has a H and then another consonant and it can’t be the O as the second guess ruled that out so that leaves the U. The O wouldn’t come after the U so it would more than likely be positioned in the fourth place rather than the last.

I couldn’t think of any words that would start ‘HURO’ so the word must be ‘HU – OR’. In my head I was just placing different letters in the middle to see what fits and even though my British mind was thinking it’s spelt wrong, the answer to Wordle 235 is…

Well done if you guessed that correctly, especially if you are in the UK as the American spelling can trip you up!