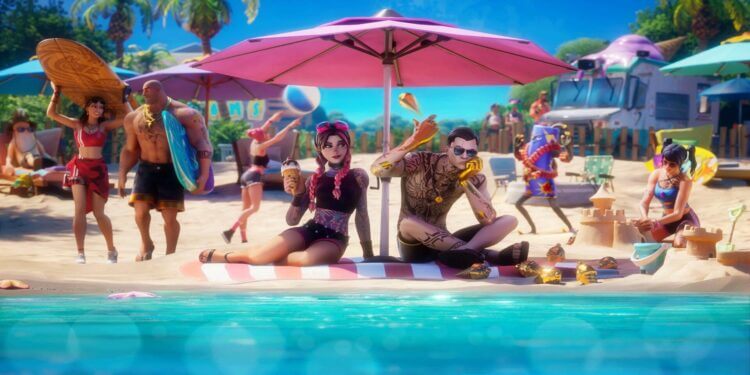 Here are all of the Fortnite Skins and other cosmetics that have been leaked and found in the v17.10 update.

We are now in the third week of Fortnite Battle Royale and Epic Games have just released the v17.10 update which is available to download now. In these updates, there are different files that can be added to the game which include upcoming cosmetics, map changes, item/weapon changes or additions and more.

Epic had hinted yesterday that you will somehow be able to access the Mothership, so we will have to wait to see when the servers are live as to how players will be able to board the ship. Dataminers have already leaked many of the upcoming Fortnite Skins and other cosmetics which you can see in this article.

You can see all of the Fortnite Skins that have been added in this update below. The majority of these Skins, except for Thanos and Batman Zero Skins of course, are summer themed.

There are also some bundles that have been added in this update, which includes a summer Midas, Firecracker Skin and a Magma Skin Bundle.

There were a few Pickaxes that have also been leaked, all of which you can see in the image below:

We don’t always get Gliders added to every update, but this time three have been added!

Here are some new Loading Screens that have been added to the files. In the first Loading Screen, you can get a better look at all the summer themed Fortnite Skins.

There were also quite a few Sprays that were leaked by dataminers:

Here are a few Music Packs that have also been added to the files: