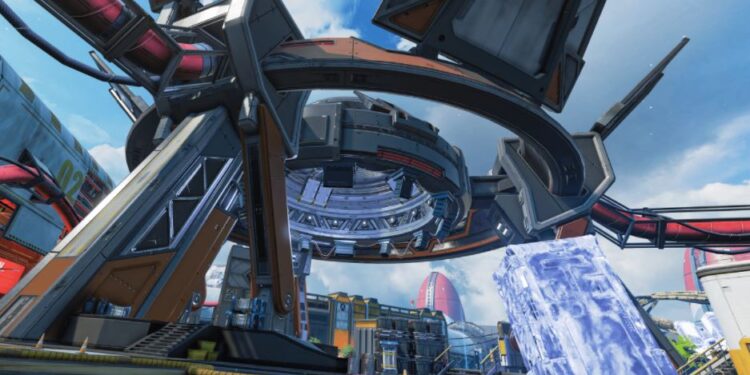 Here are all the changes we know of for Olympus in Season 12 of Apex Legends.

Olympus was the third map to be introduced to Apex Legends and is located above Psamathe, the home of Ajay ‘Lifeline’ Che and Octavio ‘Octane’ Silva. In the Defiance Launch trailer, we see Duardo Silva override the system and make changes to it by running a program called ‘DEFIANCE’ to phase the map to a different location, but it appears to have malfunctioned. Instead, the map was sent soaring down, where it almost crushed the city underneath!

Alex Graner, the Level Designer on Apex Legends has explained some of design goals they had identified for Olympus and what changes needed to be made to make the map better:

You can see a list of some new POIs and changes made to the map below.

Phase Driver is a new POI added to the south side of Olympus, which is quite large so should be a popular place for players to drop. It has also been mentioned that the Phase Driver will be reactive where players have the opportunity to grab more high-tier loot. When the driver has been activated, there will be three loot rollers phased in, with at least one of these rollers being Gold-Tiered. This will of course make some sound that can be heard by nearby enemies, so you will have to be on alert of an attack from opponents. Once the driver has been activated, there will be a 45 second cooldown before it can be used again.

Terminal is another POI that has been added near the center of the map. There will be five different entry points into this location and some exterior platforms that are raised. The Terminal connects the Labs and Bonsai, making it easier to travel between the locations.

The whole Olympus map has increased in size, especially on the south side. More room was need to fit the Phase Driver, which is connected to the Phase Runner so some of the existing POIs such as Solar Array’s, Icarus’, and Bonsai’s platforms have been pushed away from the center of the map, without being destroyed.

As the Phase Driver had malfunctioned however, this has caused the zone to have artificial platers which glitch and shift abnormally. You will also see that different objects have been warped and stuck in a phase form.

A new path has also been added in the northeast of Olympus which connects the Turbine to Rift. There were many fights that would be taken here, but as there was essentially one place for you to exit or enter if you were engaged in a fight here, the developers decided to add a small path in which you can enter or use to get away if needed.

There is also another ramp that has been added to Grow Towers to help teams to get around the area better, especially in late circles. There are more zip lines and other props that have been added around the map to help non-mobile players to get around and other areas that were only accessible by mobile players have now been blocked off or removed, such as the crane arm to the South West of Rift.

May other small changes have been implemented such as removing Redeploy Balloons in Solar Array and outside of Labs, Recon Beacon locations moved, more loot bins in Oasis, and the high-tier at Waterfall being moved to the north edge of Docks!

Make sure you check out the early Season 12 Apex Patch Notes below: