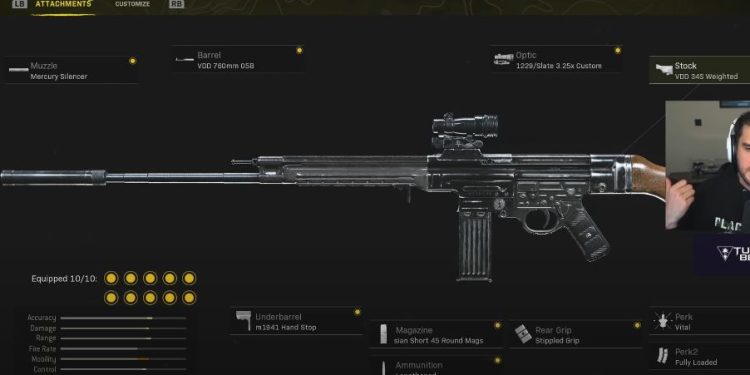 Players that bought Call of Duty Vanguard can now drop in to the new pacific Warzone map, Caldera. It’s one of the most anticipated game updates of the year, especially among Warzone fans that are bored of playing Verdansk and Rebirth Island.

Along with the new map, there are new guns from Vanguard, vehicles and a new Battle Pass for season 1. At the moment, no other Call of Duty guns can be used in Warzone as the only current playlist is Vanguard Royale Quads.

However, there are two Rebirth playlists where you can use your Cold War and Modern Warfare guns. With the Vanguard Warzone playlist, players are looking for the new meta weapon to get the upper hand on opponents. Here’s the best STG 44 class loadout for the Pacific Caldera map.

The STG44 has been one of the most dominant Vanguard assault rifles so far and is easily the top three weapons in multiplayer right now due to it’s versatility. It was obvious that this weapon would be one of the best when the Caldera map launched and that definitely seems to be the case.

Thanks to YouTuber Benny Central, we have the best STG44 Warzone loadout class in the new Caldera map:

It seems like personal preference when it comes to what muzzle you put on the STG 44 Vanguard weapon. We’ve looked at a number of different best loadouts for this weapon from multiple content creators and it all the other attachments seem like they’re the same across the board.

This will definitely be one of the long range meta weapons until Raven Software release their weapon balance update later this week. It’ll be interesting to see if this Vanguard assault rifle is nerfed.