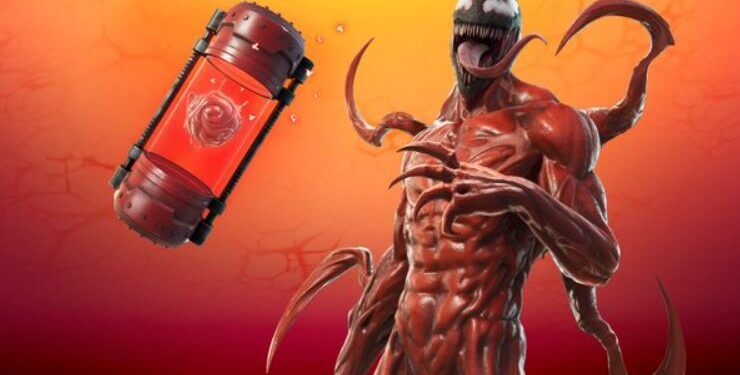 Here’s everything you need to know about the Mythic Venom & Carnage Symbiote in Fortnite chapter 2 season 8 including where to find it.

We’re a few days into Fortnite chapter 2 season 8 and from what we’ve seen, there are mixed reviews for the season. Whilst there were some map changes this season, it appears as though some players are unhappy with the lack of map changes with season launches over the past year.

Furthermore, players are unhappy with the challenge system. The legendary and epic quests have been removed and the NPC quest lines have taken their place. We’ll get one new NPC added to the map each week along with their quest line. That means players can only level up once by completing these challenges.

However, there are some positives from this season. It seems like we’ll be getting more content throughout the season in comparison to previous seasons. We also have the Venom and Carnage Symbiote mythic items in Fortnite season 8. Here’s everything you need to know about them.

The Fortnite Carnage symbiote will spawn in each new zone once the storm moves in. There’s no exact spawn location where you can find and get the Carnage symbiote. However, you will see it on the mini map and it’ll appear as a canister in-game. Here’s what it looks like:

Having the Carnage symbiote will allow players to deal 60 damage with the grab attack and will pull enemies closer. There’s a cooldow of 10 seconds between each attack. Players also have glider re-deploy and increased speed.

Here’s a look at it in action:

– Venom and Carnage spawn in at each zone in canisters
– Grab deals 60 damage and pulls enemy
– Cooldown of 10 seconds
– Glider re-deploy
– Increased speed
– You still take Fall damage
– You can only use 1 at a time pic.twitter.com/7QGM936lZW

If you’re wondering where is Carnage in Fortnite, he’s not currently an NPC so you can’t find him on the map. He’ll likely be added on later in the season.

The Venom Symbiote in Fortnite is exactly the same as the Carnage one. It will also appear on the mini map and will spawn in each zone. The damage, speed, and glider re-deploy features are the same, the only difference is the look. The canister for the Venom Fortnite symbiote is blue instead of red.

There’s an encrypted Venom Fortnite glider and players now know what it looks like as the re-deploy feature with the Venom Symbiote showcases the glider. Here’s a look at the glider below: