by Yousef Saifi
in News
34 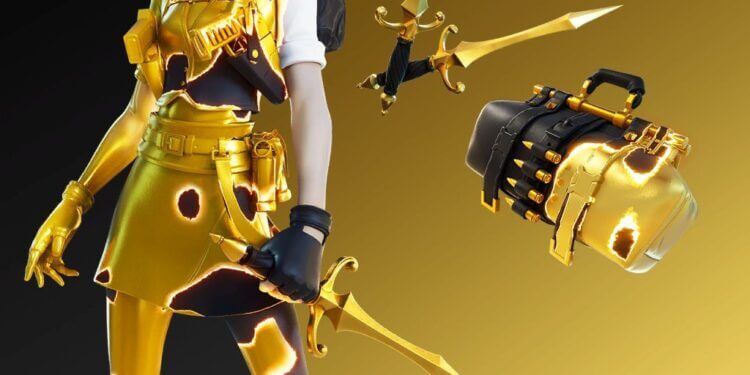 It looks like we’ll be getting a female Midas Fortnite skin in the item shop.

Epic Games announced we’d be getting a new update today, v15.50. It’s the final update of the season with Fortnite Chapter 2 Season 6 just two weeks away. The Fortnite servers are currently down for scheduled maintenance, but the new update should be available to download on each platform.

There are a few cosmetics added to the files in the update, however, there aren’t as many new skins as we’re used to seeing. Epic have reduced the amount of new skins they’ve added in updates this season, and today’s update is no different.

We do have a brand new pack in the files that’s already been leaked by popular data-miner VastBlastt. The pack/bundle is called Golden Touch and includes the Female Midas Fortnite skin. Here’s everything you need to know about the pack.

In the last Fortnite update, data-miners stated that there’s a file that suggests a female Midas skin is being worked on. The skin has now been leaked in today’s v15.50 Fortnite update, and it’ll be available in a pack. The Midas Female skin is called Marigold.

As with all leaks, there’s never any information in regards to a price and release date. However, based on the cosmetics and the amount of V-Bucks in the pack, we’re assuming the Fortnite Golden Touch Pack is going to cost $24.99. It’s likely the pack will be available before the season ends, so expect it in the next two weeks.

If there’s any other information regarding the Female Midas Pack, we’ll be sure to update this post with any new or official information.