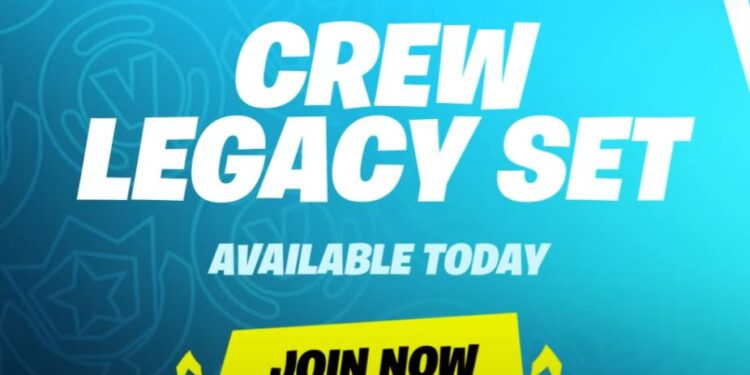 Epic Games have announced the Fortnite Crew Legacy set. Here’s everything you need to know.

Players that collect all three The First Shadows members will be rewarded with an additional skin style for each of the First Shadows skins. The style will be granted to players are some point during November, likely when the November crew pack is released.

Epic Games have released a new update today, v17.50, the final update of the season. In the update, Epic Games added in new exclusive rewards for Fortnite Crew subscribers, the Fortnite Crew Legacy Set. Here’s everything you need to know about the crew legacy set.

Fortnite Crew Subscribers will get the Fortnite Crew Legacy set starting today, August 31st. The set includes a Back Bling and an unlockable pickaxe. Each month that a player has an active subscription, you’ll get a new stage of the legacy set with a total of six different stages.

Each stage unlocks on the 14th of each month and the first stage provides players with the Protocol Pack Back Bling. The second stage addes the Protocol elite style to the back bling, and the third stage adds the Overdrive styles and the Zen Axe Pickaxe is then available for players. The pickaxe then evolves with three different styles.

If players pause their crew membersgip, you’ll still keep all the unlocked stages and will continue progressing through the stages once you decide to purchase the new crew pack. You have until August 14th, 2022 to complete all the stage progressions.

Here’s a look at the trailer for the Fortnite Crew Legacy Set: