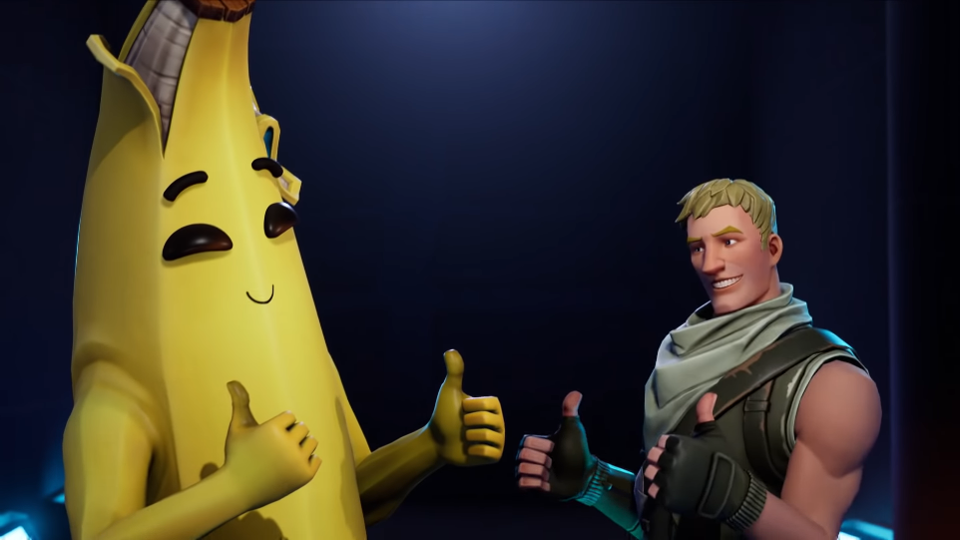 Fortnite Fortbyte #43 – Accessible by wearing the nana cape back bling inside a bana stand is today’s new Fortbyte challenge which was recently unlocked. Here’s a location guide to help you collect the Fortbyte.

Epic Games have been releasing at least one new Fortbyte challenge every day since Season 9 launched 7 weeks ago. With every Fortbyte collected, players decrypt the Fortbyte image, which was leaked in full in last week’s v9.30 update. You can see the full, completed Fortbyte image below:

Collecting Fortbytes provide players with different rewards such as cosmetics for the skins that are in this seasons Battle Pass. Upon collecting 90 Fortbytes, players will unlock the singularity skin, which is the Season 9 mystery/secret skin.

The skin was leaked in the v9.30 update and has three different stages along with 5 different color styles. Here’s a look at the Singularity skin if you haven’t seen in already:

Yesterday’s Fortbyte challenge was different to what we’ve seen from previous challenges. In order to collect yesterday’s Fortbyte, Fortbyte 20, players needed to go to the center of any of the first three storm circles. The Fortbyte would be in the middle either in the air or on the ground.

Today’s new Fortbyte challenge and location guide can be seen below:

It wouldn’t be a Fortbyte challenge if a hint as to where the Fortbyte can be found isn’t included.

Fortbyte #43 can be found inside a banana stand, but players will need to be wearing the nana cape back bling, which is a reward from the season 9 Battle Pass.

Thanks to Twitter user Guille-Gag, we have a location guide image for Fortbyte 43: