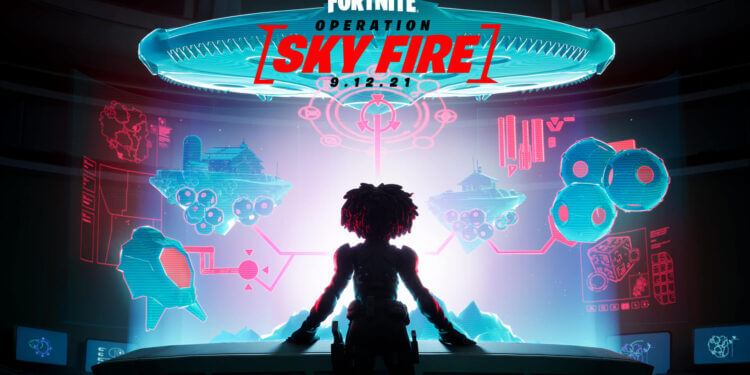 Here’s what we know about the Fortnite chapter 2 season 7 event, Operation Sky Fire, including the date and time of the event.

We saw a mothership enter the Fortnite world and hover around the map throughout season 7. We’ve had a few named locations being abducted by the mothership and Corny Complex will be the final location that’ll be abducted.

A couple of weeks before the v17.50 update, we knew we could be getting a Fortnite live event to end season 7 and start season 8 based on leaks from an insider at Epic Games. This insider has a good track record and recently leaked the Shang-chi collaboration which was official when the item shop reset last night.

We now have more information regarding the Fortnite chapter 2 season 7 live event including a description, date and time. Here’s everything we know so far.

Here’s a look at the official image for the Sky Fire Fortnite event:

According to Data-miners GMatrixGames and Swag_Chri, the season 7 Fortnite live event will take place on September 12th, 2021. This is the day before the new season is expected to start. The time of the event will be 4 PM ET (9 PM BST). This could potentially change as we get closer to the event, but we’ll keep you updated with any changes.

There’s a chance we could get downtime as soon as the event ends on Sunday, September 12th until the new season launches. Epic usually launch new seasons on a Tuesday, so we could be looking at over 24 hours of downtime leading into chapter 2 season 8.

There should be a countdown timer for the Sky Fire season 7 live event appearing in the game today with data-miners stating it’ll appear at 10 AM ET. Once we get confirmation of the event from Epic, we’ll likely get teasers leading up to the event and the new season.