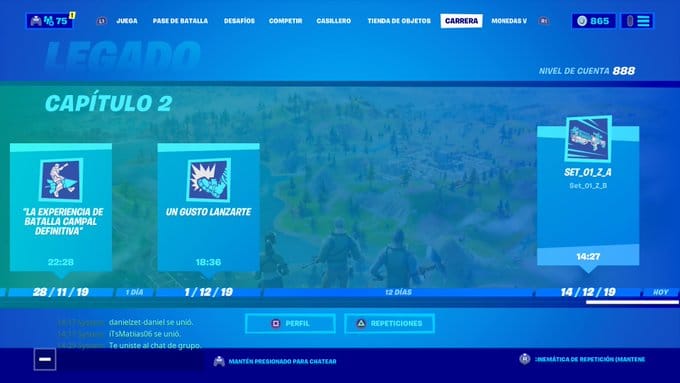 Epic Games added an achievements feature in Chapter 2, Season 1. There’s a number of different achievements players can complete, and they can be viewed in the career tab in Fortnite.

Players have discovered that they have completed achievements called SET_01_Z_A and SET_01_Z_B. Here’s everything we know so far about the two set achievements that players are receiving.

Players are being notified that they have completed an achievement. They’ll see “Get Legacy” or a similar message pop up at the bottom of the game, and when they head over to the career tab, they’ll see SET_01_Z_A and SET_01_Z_B.

These are encrypted Fortnite achievements for the upcoming Fortnite Star Wars event, but clearly there’s a glitch where players are already receiving them.

According to leaks, the achievement is actually called “I have a bad feeling about this”, and the description is “Took damage from the storm”.

Here’s what the SET achievement looks like when looking at the achievements you’ve completed:

It has been confirmed by leaker XTigerHyperX that this is a Fortnite Star Wars achievement that’s achieved by jumping in the storm. How that links to Star Wars? I have no idea.

for the people Receiving achievement " SET_01_Z_A "
they are encrypted that's why , they are star wars achievements.

You can get the achievement by jumping on the storm

Remember the event begins in one hour as of writing with doors to the live in-game event opening in half an hour. Be sure not to miss this event as you’ll receive the free TIE Whisper Glider along with an amazing experience that is more than just watching a never-seen-before The Rise of Skywalker clip.