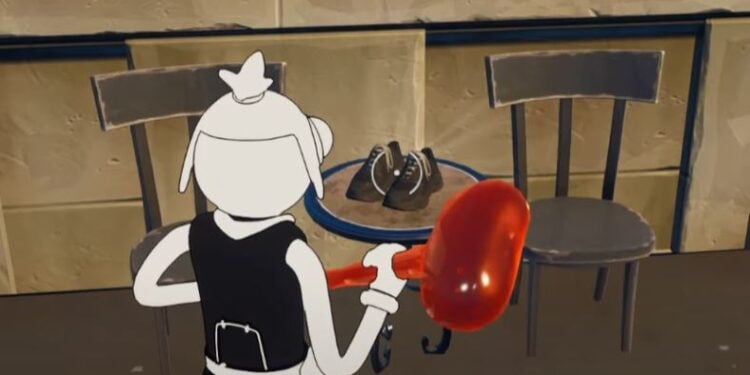 Here’s where to find and collect Triple S Sneakers in the Strange Times Featured Hub.

We already have a collaboration in Fortnite chapter 2 season 8. The Fortnite x Balenciaga was leaked yesterday before Epic Games made an official announcement through a blog post. The collaboration includes item shop cosmetics and quests.

We have 2 quests/challenges to complete and each provides a Balenciaga cosmetic reward. Unfortunately, both the free rewards are sprays that will likely go unused by most but it’s better than nothing.

One of the challenges requires players to collect Triple S Sneakers in the Strange Times Featured Hub. Here’s a quick guide on how you can complete this challenge as quickly as possible.

How to Enter the Strange Times Featured Hub & Creative Code

In order to get into the Strange Times featured hub, click on the game mode above the “play” button in the lobby, you’ll then see the options including different modes for Battle Royale.

On the right side you should see the “creative” option. Click Creative and press play. You’ll join the Strange Times features hub and you’ll be able to collect the Triple S sneakers in order to complete the challenge. The code for the featured hub is 9106-1254-1261.

Here’s what the Triple S sneakers look like in-game:

They’ll glow as shown above and once you collect one of the sneakers, you’ll get a larger golden glow to show you’ve collected them. You should be able to collect all 40 Triple S sneakers in one go.