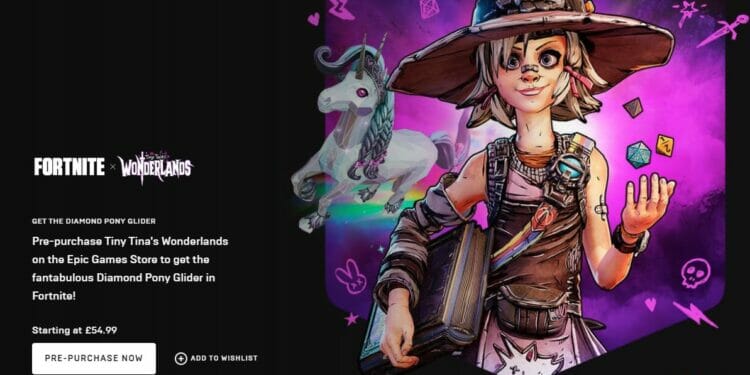 Here is how to get the Tiny Tina’s Diamond Pony Glider for free in Fortnite Battle Royale.

There are many collaborations that Epic Games have done with other games to bring exclusive content to Fortnite players and another collaboration has just been announced on the Epic Store for a new game that is being released, called Tiny Tina’s Wonderlands. You can now pre-order this game from the Epic Store as it will be released on 24th March 2022.

So what is this game about? Here is the description of the game, shown on the Epic Store:

“Embark on an epic adventure full of whimsy, wonder, and high-powered weaponry! Bullets, magic, and broadswords collide across this chaotic fantasy world brought to life by the unpredictable Tiny Tina. Roll your own multiclass hero and loot, shoot, slash, and cast your way through outlandish monsters and loot-filled dungeons on a quest to stop the tyrannical Dragon Lord. Everyone’s welcome, so join the party, throw on your adventuring boots, and be Chaotic Great!
Tiny Tina is your disorderly guide through an extraordinary tabletop realm where rules rarely apply. Explore a vast overworld spanning majestic cities, dank mushroom forests, foreboding fortresses, and more! Blast baddies with powerful guns and devastating spells in frenetic first-person battles. Use your firepower to vanquish legions of enemies, including smack-talking skeletons, land-roaming sharks, and colossal bosses. Then delve deeper into dangerous dungeons for a shot at epic loot!
Joining you at the table are headstrong captain Valentine and rule-obsessed robot Frette. During your quest to defeat the Dragon Lord, you’ll meet a cast of lovable misfits like a lute-wielding Bardbarian and your very own Fairy Punchfather. Create the perfect hero with deep customization, including a multiclass system that lets you mix and match six unique character skill trees, all with their own awesome abilities. Level up, refine your build, expand your arsenal, and become the ultimate adventurer.
Enjoy the story solo or start a party with up to three friends in seamless online multiplayer. Share the spoils or rush to get the shiniest loot—how you play is up to you!”

If you pre-order this game from the store before March 25th when the game has been released, you will be granted the Diamond Pony Glider in Fortnite. You will then be able to use this Glider in-game on March 25th after 7pm ET but you must make sure your Epic Games account is linked to the account you play Fortnite on in order to redeem the item. It will automatically be added to your locker so there is nothing you need to do in order to claim it.

Here is what the Diamond Pony Glider looks like in Fortnite:

If you do not want to pre-order the Tiny Tina’s Wonderlands game from the store but you like the Glider, you don’t need to worry as it will be made available in the Fortnite Item Shop from the 1st April 2022 until 8th April 2022 at 8pm ET. The cost of the item will be 1,200 V-Bucks by itself.

Now if you decided after you had purchased the Diamond Pony Glider that you did in fact want to purchase the game, Epic Games will award you 1,200 V-Bucks for purchasing the game at a later date if you had purchased the Glider already.
If for some reason you decide you don’t actually want the Tiny Tina’s Wonderlands game and get a refund for your purchase from the Epic Games store, you will also have the Diamond Pony Glider taken from your inventory, so make sure you don’t want the item before requesting your refund.