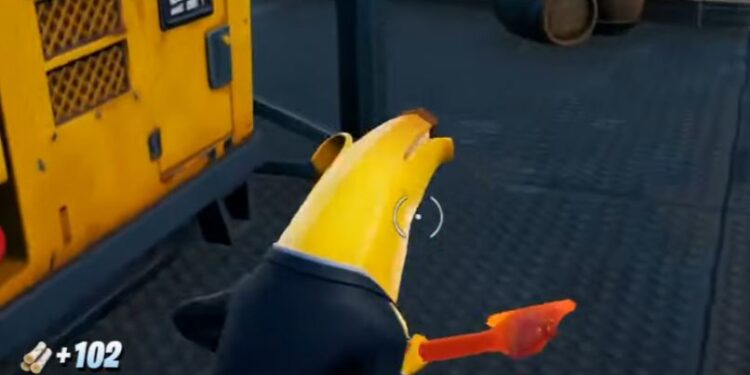 Here’s where to destroy stolen IO intel for the Fortnite week 13 quest.

We’re less than two weeks away from the new season and we should see a countdown timer in-game tomorrow if the information posted by the Epic Games insider is correct. Before the season ends, we still have challenges to complete.

We have the week 13 challenges this week followed by the final set of challenges next week. The storyline is heating up and the week 14 legendary challenges suggest the mothership is coming down.

One of today’s new challenges, destroy stolen IO intel, also ties into the storyline. The description for the challenge is “someone has stolen vital IO intel. It needs to be destroyed… before it’s used against us. Too many leaks to be a coincidence. The mole is getting bold”.

The challenge provides 30,000 season 7 XP and players only need to find and destroy stolen IO Intel once. Here’s a quick guide on how to complete the new epic quest.

Where to Destroy Stolen IO Intel In Fortnite

To complete this challenge, players only need to destroy stolen IO intel once. Usually before a challenge is released, there are a number of guides on how to complete the challenge because the locations are found using replay mode.

For the destroy stolen IO intel challenge, replay mode ins’t showing the location for where you can find and destroy IO intel. However, there are some content creators that are stating that they know where to find the intel.

One of the locations can be fourth north west of Dirty Docks. Here’s the map location:

It should be located in front of the caravan. There are three other locations, but we’ll confirm those locations when the challenge has been released. We’ll update this as soon as possible.