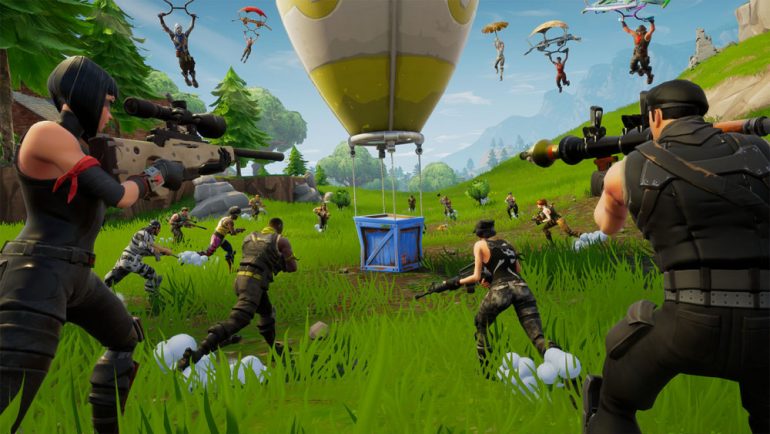 Epic have just finished week 5 of the Summer Skirmish event and have commented on the event so far:

We’ve just finished up Summer Skirmish Week 5 and we wanted to give you folks a mid-skirmish update from some of the previous weeks. We’re talkin’ interesting stats, additional info on a few standout performers, and our learnings about formats so far. Here’s a quick breakdown of some fun stats from the past weeks:

A general note about statistics… it’s really difficult to pull off consistent great placements or high elimination games with a lobby full of some of Fortnite’s best players. We wanted to properly salute the talented players that have participated each week.

Showdown players have really been able to make a name for themselves through the Summer Skirmish. One in particular who has quickly risen to the top is NotVivid. He placed 19th and 155th in the two Solo Showdowns, but impressed with consistent performance and high placings during Summer Skirmish. He has bookended the Friday Skirmishes so far, with victories in both Week 1 and Week 4.  In Week 1, NotVivid and his duo partner were able to fight through the masses to remain on top, and in Week 4 pulled off two clutch victories from behind to steal away the top spot.

Atlantis Mitr0 continued to show stellar consistency by topping Saturday Summer Skirmish group in Week 3. The overall winner of the Blitz Showdown LTM and earned the highest score across all regions – nearly 50 points ahead of the next closest finisher. Since battling his way into the Skirmish, Mitr0 has now finished 13th and 1st in his two entrances, with strong individual performances both times.

Another Showdown player who has risen to the occasion is Reverse2k. Reverse2k was able to secure an impressive placement in the Blitz Showdown LTM and he has turned that into three very consistent performances in the Summer Skirmish. He had managed to net himself 13th in the Week 2 High Score format, while he and TSM Daequan were able to secure a 16th place finish the following week. Week 4 Reverse catapulted to the forefront, with an amazing 9 elimination game, thrusting him atop NA throne, earning himself 5th place and a large payout.

Lastly, there was another Showdown participant who caught fire and surged through the competition to win Week 4’s “Hold the Throne” on Saturday. Secret Domentos was able to capture the 58th spot during the July Showdown, but his true potential showed in Week 4 of Summer Skirmish. Domentos was able to win 3 of the 9 matches and racking up an impressive 19 eliminations (3rd highest, behind BlaxTV and Teekzy) storming up the ladder to capture the victory. He’s the only Summer Skirmish competitor to secure three Victory Royales in a single day of competition.

One consistent challenge is the act of transitioning from a participating player to an in-game spectator, watching heavy build fights near the final circles from the Player PoV. So far, we haven’t been able to make use of the Live Spectating functionality that we had available at the Pro-Am available on the live servers. This past weekend was the first time we’ve have a limited version of the Live Spectator tool available on the public servers and we’re excited to begin integrating this into our broadcasts.

We also recognize that the lack of live statistics make it difficult for casters to tell compelling stories during the matches and the for viewers to watch along with high interest levels. Our analytics team is working to solve these problems. We hope to soon be able to deliver information of all kinds to Fortnite viewers more quickly during events.

We’ve had a lot of fun creating new formats each week. There are lots of new learnings that we walk away with after each Summer Skirmish weekend by creating new scoring schemes and incentivizing different win conditions. Some formats have been extremely weighted in one direction over the other in order to observe play behavior and collect statistics over a prolonged series of matches in an isolated, high-stakes environment.

A few of our core values when creating formats are simplicity, match tension and upholding the integrity of Battle Royale. Ultimately, we want to find what gives the competitors the best play experience while maintaining a high level of viewing entertainment.

Lastly, thanks to the participants and viewers that have been helping us along the way!