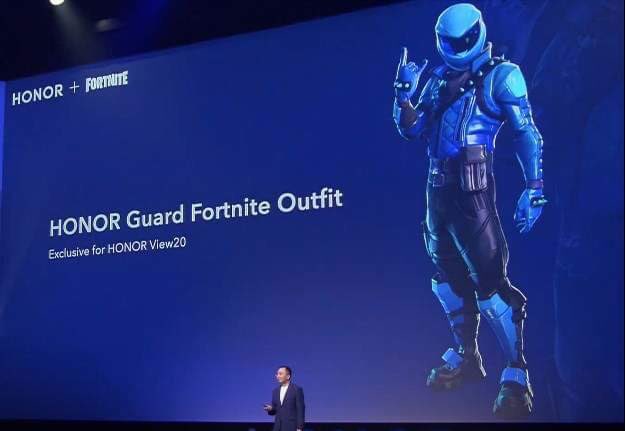 A new Fortnite exclusive skin/outfit, Honor Guard, has been revealed.

Fortnite are known to partner with worldwide brands in order to offer exclusive bundles to players. In the past, Epic have partnered with Sony to offer several exclusive Fortnite bundles for PlayStation, Microsoft for the Xbox Eon bundle, Nintedo for the Double Helix Nintendo Switch bundle, and with GeForce for the Reflex bundle. A brand new Fortnite exclusive skin, Honor Guard, has now been revealed during the launch of the Honor view20 mobile phone.

The skin will be available to those who purchase the HONOR View20 phone.

The UK Twitter account for Honor has tweeted that more details will follow soon. The Honor View20 phone will allow for 60 FPS gameplay for Fortnite. The phone will provide an average frame rate of 59.13 fps, 2.82% jitter rate, and 0.2% low frame rate.

The promotion is similar to what we saw with Samsung and Fortnite. Galaxy Note 9 users received the Galaxy skin along with a Back Bling, Glider and Pickaxe. The skin was exclusively available to Note 9 owners. The Galaxy skin was released initially, however, the matching cosmetics were given to players at a later date. It’s possible we could see something similar with the Honor Guard exclusive skin but we’ll have to wait and see.

We’ll keep you updated with any further information on the new Fortnite skin.