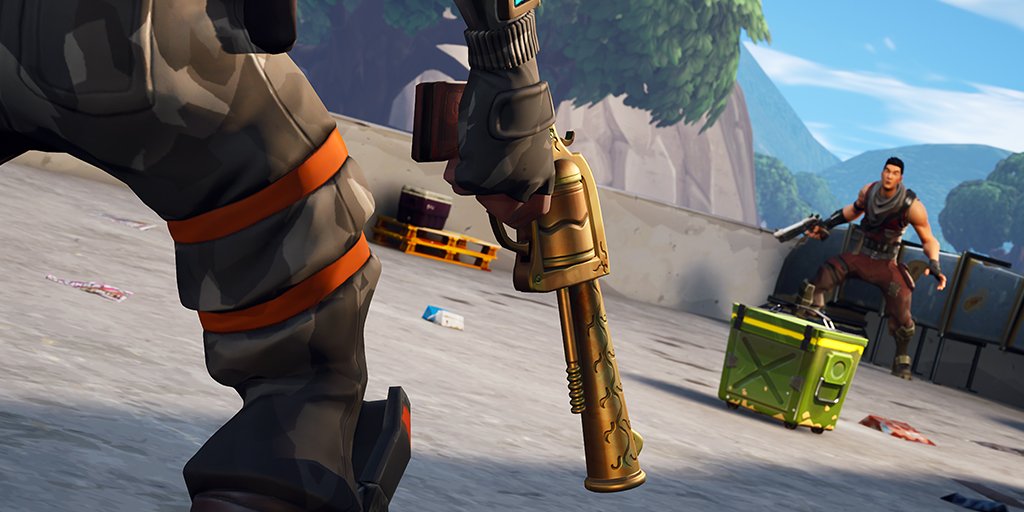 Epic Games have annoucned that the Solo Showdown will be making a return. The first 25 matches in the Solo Showdown LTM will bne counted towards your score. The winner of the LTM will be awarded 50,000 V-Bucks, with 25,000 v-bucks awarded to the runner up.

We’re pumped to bring our players another competitive experience with the return of the Solo Showdown Limited Time Mode.

Trying to prove yourself on the battlefield? Queue up for the Solo Showdown mode for a hotly contested Battle Royale experience. Unlike other LTMs, Solo Showdown will not change core gameplay of the current Solo mode. Instead, you will be placed against other self-selected competitors making this the ultimate test of survival.

The Fortnite team will frequently update this blog with the Solo Showdown standings. Top performers will be rewarded at the conclusion of this competition.*

In the Solo Showdown LTM you will be placed against other self-selected competitors making this the ultimate test of survival.  Placements in this limited time mode will be specially tracked and determine rewards you receive at the end of the event. The top 100 players in each server region will be awarded.

To be eligible for the Contest, you (“Contestant”) must:

The Contest is open to participants worldwide, but is void wherever restricted or prohibited by law.

Employees, officers, directors, agents, representatives of Epic Games, Inc. (“Epic”) (including the legal, promotion, and advertising agencies of Epic) and their immediate family members (defined as spouse, mother, father, sisters, brothers, sons, daughters, uncles, aunts, nephews, nieces, grandparents and in-laws, regardless of where they live) and those living in their household (whether or not related), and each person or entity connected with the production or administration of the Contest, and each parent company, affiliate, subsidiary, agent and representative of Epic are not eligible.

Epic reserves the right to disqualify any Contestant in its sole discretion for any reason, including without limitation if Epic determines Contestant is cheating, hacking, harassing, using abusive or offensive language, account sharing, teaming, sabotaging, spamming, engaging in social engineering, scamming, or violating the Fortnite EULA.

The following scoring structure shall apply solely to this Contest.

Each match awards a Score based on final placement. Cumulative Score across the contestants 25 matches will determine winners.

In addition to Score based on placement, the player will be awarded 6 points for each enemy they eliminate.

In the event of a tie, the following statistics, in the order presented here, will be used as tiebreakers: total wins, total eliminations, and average placement during the Solo Showdown LTM.

The top 100 Contestants at the end of the Contest Period will receive prizes.

Only the first 25 matches in Solo Showdown LTM will count towards a Contestant’s Score.

The Contestant with the highest score will have 50,000 V-bucks added to their Fortnite account.

Contestants who place 2nd – 4th will have 25,000 V-bucks added to their Fortnite accounts.

Contestants who place 5th – 50th will have 13,500 V-bucks added to their Fortnite accounts.

Contestants who place 51st – 100th will have 7,500 V-bucks added to their Fortnite accounts.

Contest is subject to these Rules. By participating, Contestants agree: (i) to be bound by these complete Rules and the decisions of Epic which shall be final and binding; and (ii) to waive any right to claim ambiguity in the Contest or these Rules, except where prohibited by law. By accepting a prize, selected Contestant agrees to release Epic from any and all liability, loss or damage arising from or in connection with awarding, receipt and/or use or misuse of prize or participation in any prize-related activities. Epic shall not be liable for: (i) telephone system, telephone, or computer hardware, software, or other technical or computer malfunctions, lost connections, disconnections, delays or transmission errors; (ii) data corruption, theft, destruction, unauthorized access to or alteration of entry or other materials; (iii) any injuries, losses or damages of any kind, including death caused by the prize or resulting from acceptance, possession, or use of a prize, or from participation in the Contest; or (iv) any printing, typographical, administrative, or technological errors in any materials associated with the Contest. Epic reserves the right to cancel or suspend the Contest in its sole discretion or due to circumstances beyond its control, including natural disasters. Epic may disqualify any Contestant from participating in the Contest or winning a prize if, in its sole discretion, it determines such Entrant is attempting to undermine the legitimate operation of the Contest by cheating, hacking, deception, or any other unfair playing practices intending to annoy, abuse, threaten, undermine, or harass any other players or Epic’s representatives. The internal laws of the State of North Carolina will govern disputes regarding these Rules and/or this Contest. Epic reserves the right, in its sole discretion, to cancel, modify, or suspend the Contest should a virus, bug, computer problem, unauthorized intervention, or other causes beyond Epic’s control, corrupt the administration, security or proper play of the Contest. Any attempt to deliberately damage or undermine the legitimate operation of the Contest may be in violation of criminal and civil laws and will result in disqualification from participation in the Contest.  Should such an attempt be made, Epic reserves the right to seek remedies and damages (including attorneys’ fees) to the fullest extent of the law, including criminal prosecution. Epic reserves the right to disqualify any Contestant it finds to be tampering with the entry process or the operation of the Contest or violating these Rules. Epic is not responsible for any problems, bugs, or malfunctions Contestants may encounter. This Contest is subject to all applicable federal, state and local laws.

Epic reserves the right to use the name, likeness, and/or Epic account ID of any Contestant, for publicity purposes prior to, during, or after the Contest end date, in any media, throughout the world, in perpetuity, but only in connection with publicizing the Contest, without any compensation or prior review unless specifically prohibited by law.

At any time before, during or after the Contest Period, Epic may, in its discretion, choose to post Contestants’ name and profile information online (including Facebook pages, Twitter feeds, YouTube channels, and third-party websites) for promotional and entertainment purposes only. Posting of this content will not mean that said Contestants are eligible to win or have been selected as winners. Contestants understand that users of these sites may share, comment on (including negatively), and re-post such content. Any requests by Contestants to be removed from consideration will be accommodated to the extent practically possible.

Except as prohibited by applicable law and as a condition of participating in this Contest, each Contestant hereby irrevocably and perpetually waives any right s/he may have to a trial by jury in respect of any litigation directly or indirectly arising out of, under or in connection with this Contest, any document or agreement entered into in connection herewith, any prize available in connection herewith, and any of the transactions contemplated hereby or thereby.