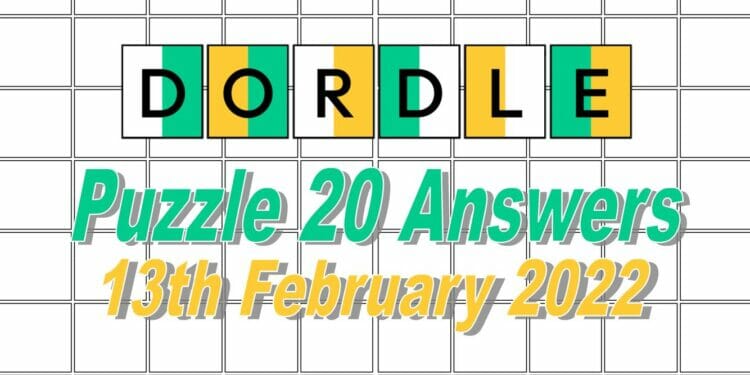 UPDATE: CLICK HERE FOR THE HINTS AND ANSWERS FOR DORDLE 21!

So you must of heard of Wordle by now, which is probably one of the most popular word games right now but have you heard of Dordle? This game works the same as Wordle, except instead of solving one 5 letter word, you need to figure out the two Dordle 5 letter words side by side. This means that the words you guess are applied to both sides of the Dordle grid and you need to solve both the words in seven tries. Here is what the game looks like:

When you make a guess it shows up on both sides of the board and the letters will turn green if they are placed in the right place and it’s the right letter, yellow if it’s the right letter but in the wrong place and if the letter isn’t in either of the words, the colour will not change. There is a new Dordle released every day and we will be covering the answer and giving you hints as to what the Dordle words of the day are and the new puzzle is released at midnight in your time zone.

Dordle 20 has now been released on 13th February 2022 and as previously stated, we will be giving you clues to help you solve the words today.

So what are the Dordle words of the day? Here’s how I got to the answers. The first word I guessed is ‘URINE’. This guess showed that there was an I and an N in both words, but they were placed in the wrong position in both words so I decided to guess the word ‘SLAIN’. This guess was a great one as it shows that I had placed the ‘AIN’ in the correct place for the first word and in the second word, The S, A and I were placed in the right spots and I knew there was an L and an N, which means all I had to do was switch these letters around to get the answer to the second word.

The answer to the second word in Dordle 20 is…

When I guessed this correctly, it didn’t really give me anything I didn’t already know about the first word, but I just had to think of words that ended in ‘AIN’ and started with letters I hadn’t already ruled out and then the answer to the first word came to me, which is…

Well done if you guessed both letters correctly as this puzzle is a lot trickier than Wordle!