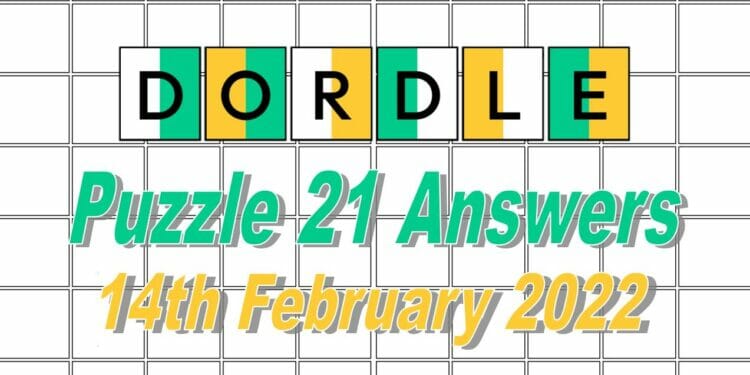 UPDATE: THE ANSWER AND HINTS FOR DORDLE 22 ARE NOW LIVE, CLICK HERE FOR MORE!

Wordle has become a very popular game all over the world and has inspired many other games similar to it to be made, such as Dordle. So we all know the rules of Wordle by now right? You have a maximum of six guesses to figure out the five letter Wordle of the day, but do you think you will be able to guess two five letter words in a maximum of seven tries? Here is what the game looks like:

When you make a guess, it is input in the first row on both sides and like Wordle will turn green if you have entered the correct letter in the correct position and will turn yellow if the letter does appear in the word, but it’s not placed correctly and there will no colour change if the letter guessed does not appear in the word. Once you have guessed one of the words, the next guesses will only appear on the side of the grid for the word you have not guessed yet.

There is a new Dordle released every day at midnight in your time zone, but there are some issues with this game in its current state. Many of the Wordle fans love to see their win streaks and the guesses they have made to be able to discuss their results with their friends later on in the day. With Dordle, you are not able to do that as when you’ve closed the game, when you go back onto it, all of the guesses you made have been removed. The owner of Dordle, Guilherme S. Töws, is making changes to the game as they see fit, but we hope they implement these changes some time in the future!

We are now on Dordle 21 which has been released on the 13th February 2022 and we will be giving you clues to help you solve the words today. Here are the hints we have for the Dordle words today.

So I started today’s Dordle by using the word ‘URINE’ as it has three vowels and I think that can help when trying to figure out two words. This showed that there was an I in the first word, but it was in the wrong position and the U was placed in the correct place for the second word and there was an R in it. As I like to also play Wordle, I thought I would try a recent answer from there to see if it would be the answer to the second word and it was! The second answer for the Dordle 21 is…

This also showed that there is a T in the first word, but again it isn’t the third letter of the word so I decided to go with the word ‘SIGHT’. This placed all of the last four letters in the correct place which meant I only had to guess the first letter. There are a few words that would have worked, but the one I went for just so happened to be the answer to the first word for Dordle 21 which is..

Well done if you guessed them correctly! We will be covering the answer to these puzzles everyday so make sure you come back for the hints and answers if you need the help!