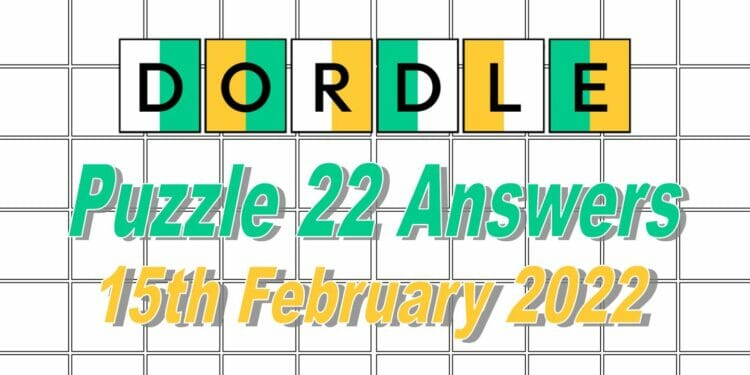 UPDATE: CLICK HERE FOR THE HINTS AND ANSWERS TO DORDLE 23!

Dordle is the much harder version of the very popular Wordle word puzzle game as instead of guessing one five letter word, in Dordle you need to answer two side by side! Every guess you make for one word will be the same one you make for the other, which means you need to think carefully about which words you guess to try and get more letters revealed for both words. There are eight guesses that you can use for Dordle, so if you can guess one of them within four guesses, it should be easier to figure out the last word.

This is a relatively new game and so there are some changes that are being made to the game as the developer is taking on feedback from the community and making the changes they deem necessary. A few changes I would like to see implemented in the game is to save the guesses made for the day so you can look back and discuss them with friends. It would also be nice to see the steak of how many daily puzzles have been guessed correctly.

This game can be pretty hard to complete at times, especially if you haven’t played it before but don’t worry as we will be here every day to give you hints about both of the words featured in the Daily Dordle puzzles as well as giving you the answer below. Remember to scroll slowly so you don’t reveal the answer before you’ve read all the hints.

Here are the hints we have for Dordle 22 released today:

Here is how I figured out the Daily Dordle 22 answers. I decided to start with the word ‘HEART’ which showed me that there is an E and A in the first word and that I placed the A in the correct place for the second word, which also had an R in it. I decided to focus on the second word and guessed the word ‘BRAIN’, which showed that all letters, except for the first letter were placed in the correct place, so I decided to guess the next word, which was the answer for the Dordle 22 puzzle today which is..

From the guessed I had made so far, I knew that there was an E, A D and a B in the first word, so I decided to use the word ‘ABLED’ as my next guess. This placed both the A and the B in the correct place, but the E and D were still in the wrong place. From all of the letter remaining that I hadn’t used I managed to guess the first word for the Dordle 22 puzzle, which is…

Well done if you guessed both Dordle words correctly! Make sure you check out all the other similar games, such as Quordle which is so much harder as you have to guess four words at the same time! You can see the hints and answers for todays Quordle down below: