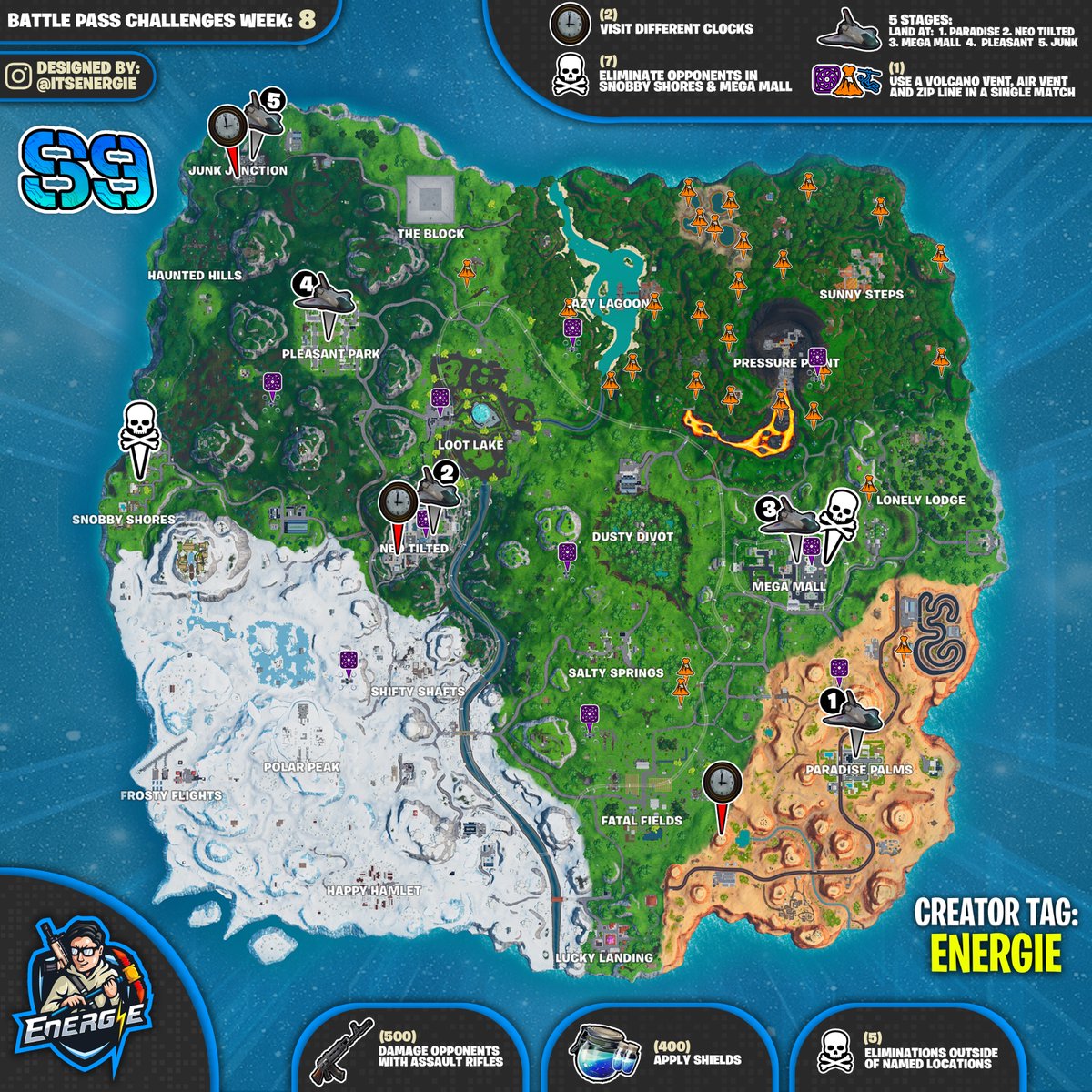 Here’s a Fortnite cheat sheet for the Season 9, Week 8 challenges that were released today.

Week 8 of Fortnite season 9 began today at 2PM BST when the challenges were released. As with previous weeks this season, the challenges are your standard, tedious challenges. There’s only one new challenge that hasn’t been seen in previous seasons.

This week’s challenges include a staged challenge requiring players to land at different named locations on the map, using a volcano vent, air vent, and a zipline in a single match, eliminating players outside of named locations, applying shields, eliminating opponents in Snobby Shores or Mega Mall and visiting different clocks that are spread out on the Fortnite map. You’ll find the cheat sheet for this week at the bottom of this post, however, there’s only one, possibly two challenges that actually require a cheat sheet.

The new challenge for this week are visiting different clocks, we’ve had similar challenges, but not requiring players to visit clocks. You’ll be able to find clocks in Neo Tilted, the large unmissable clock. You’ll also find a clock in the desert, south west of Paradise Palms as well as a clock at Junk Junction near the south side of the named location. Here’s a map of all the clock locations on the map:

This challenge will be quicker to complete if you land at Mega Mall as you usually don’t get too many people landing at Snobby Shores. However, if you attempt to complete the challenge today, you’ll likely have more people than usual landing at Snobby Shores in order to avoid the chaos at Mega Mall as it can be quite tricky to obtain a gun when you have half the lobby landing at the same location.

Another pretty standard challenge to complete, deal 500 damage with assault rifles. Land at either Snobby or Mega Mall and attempt to pick up an assault rifle so you can try and complete the “eliminate opponents in” challenghe and the assault rifle damage challenges in one go.

USE A VOLCANO VENT, AIR VENT, AND A ZIPLINE IN A SINGLE MATCH (1)

The best place to use a volcano vent, air vent and a zip line in one match will probably be at Pressure Plant. The reason is there’s a sky platform towards the east, which has air vents on top of them. There’s also a zipline underneath the same sky platform. You can then use the air vent at the top to fly off the platform and glide close by where you’ll have plent of volcano vents to pick from. This challenge should only take you a couple of minutes if you land at Pressure Plant.

ELIMINATIONS OUTSIDE OF NAMED LOCATIONS (5)

This is different. Usually, you’ll have challenges where you need to eliminate opponents at certain named locations. This is an easy challenge to complete, especially in Team Rumble as you’ll usually find yourself in a gun fight outside of a named location.

Here’s the cheat sheet for Fortnite Season 9, Week 8, which was created by ItsEnergie: