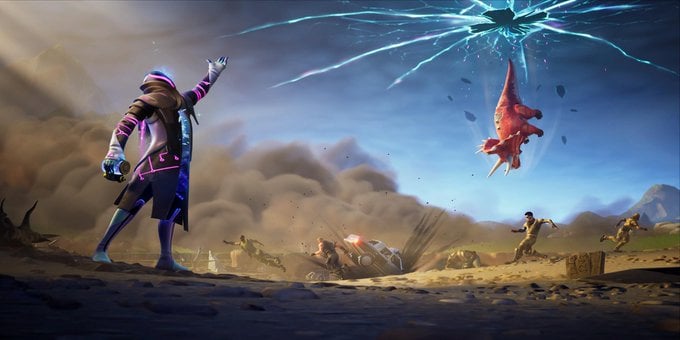 The Fortnite v10.10 content update will go live in a few hours. Here’s everything we know that’ll be included in the patch notes.

Epic announced that the v10.10 content update would be releasing today and here’s what we can expect in the patch notes.

Epic announced yesterday that the v10.10 content update for Fortnite Battle Royale would be coming today, August 20th. The announcement was made shortly after the in-game news feed updated to announce the new item that would be added.

The update will go live in-game at 8 AM EST / 1 PM BST. There will be no server downtime as it’s a content update, and players won’t need to download new update files. With content update, the new item can take 20 minutes or longer than the provided update time to actually appear in-game, so keep that in mind.

The new item that’s coming to Fortnite Battle Ryoale is the throwable Junk Rift Item. The item was originally leaked in the v10.10 patch update last week, and the item is showcased in the week 4 loading screen, which was also leaked last week.

There wasn’t much information leaked regarding the item after the v10.10 update, however, dataminers recently managed to find out the items that can come through the Junk Rift item when thrown.

As seen in the week 4 loading screen above, the junk rift can drop a dinosaur, but dataminers revealed that the item can also drop an anchor, port-o-potty and a police vehicle. The item still seems useless and likely be vaulted within a season.

In previous seasons, content updates usually didn’t include map changes and if they did, they were minor changes. In the v10.00 content update, Epic included a major map change with Neo Titled being changed into Tilted Town through the rift zone.

We’ve seen Mega Mall being changed back into Retail Row in last week’s update, and we’ll get another rift zone that’ll change a POI in today’s content update. Rift beacons at placed in the POI that’ll be changed, with the first spotted at Neo Tilted followed by one at Mega Mall. These named locations were then changed, and we’ll be getting more of the same today.

A rift beacon was seen at the soccer stadium, which was activated yesterday, and we’ll see this location change with a rift zone. Dataminers were unable to leak what the location will look like after the v10.10 content update goes live, so we’ll have to wait for the official patch notes to know more about the new location.

We’ll be posting the official patch notes as soon as they’re released by Epic Games, so be sure to follow us over on Twitter @Fortnite_BR and turn on website notifications.