Epic Games have teased another collaboration with Naruto in 2022 dubbed “Rivals”.

Epic Games have been expanding their metaverse ever since they announced their very first collaboration back in chapter one season four when the first Marvel Avengers x Fortnite collaboration was announced.

Each season, we have multiple collaborations with new cosmetics being added to the game. In this season’s Battle Pass, there are two collaboration skins; Darth Vader and Indiana Jones.

We’ll also be getting more Marvel x Fortnite cosmetics through the Zero War comics. Those that purchase printed versions of the cosmetics, they’ll get a code that will give them a free Fortnite Marvel cosmetic.

The first cosmetic is the Spider-Man Zero outfit, which will be followed by an Iron Man-based Wrap, a Wolverine-based Pickaxe, a spray, and a loading screen, all of which will be released within the next couple of months.

Epic Games have now confirmed another Fortnite x Naruto Collaboration will be coming to the game next week.

A few minutes ago, Epic Games tweeted a teaser image to reveal part 2 of a Naruto x Fortnite collaboration will be coming to the game next week called “Rivals”. 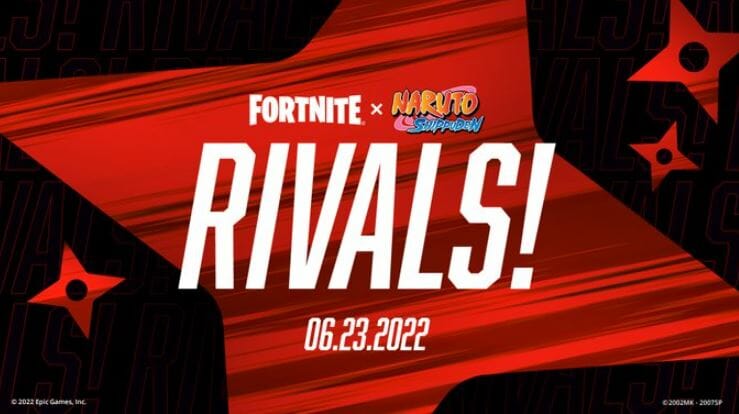 We don’t know what cosmetics will be available, whether there will be any challenges and rewards available for free, or whether this collaboration will include a tournament that’ll allow players to earn the cosmetics for free.

Although there’s no information regarding what Naruto skins will be available in the new 2022 collaboration, we do have a release date. The Rivals Naruto x Fortnite collaboration will be released on June 23rd, 2022.

We should have information regarding the collaboration will likely be released a day or two before the official release.