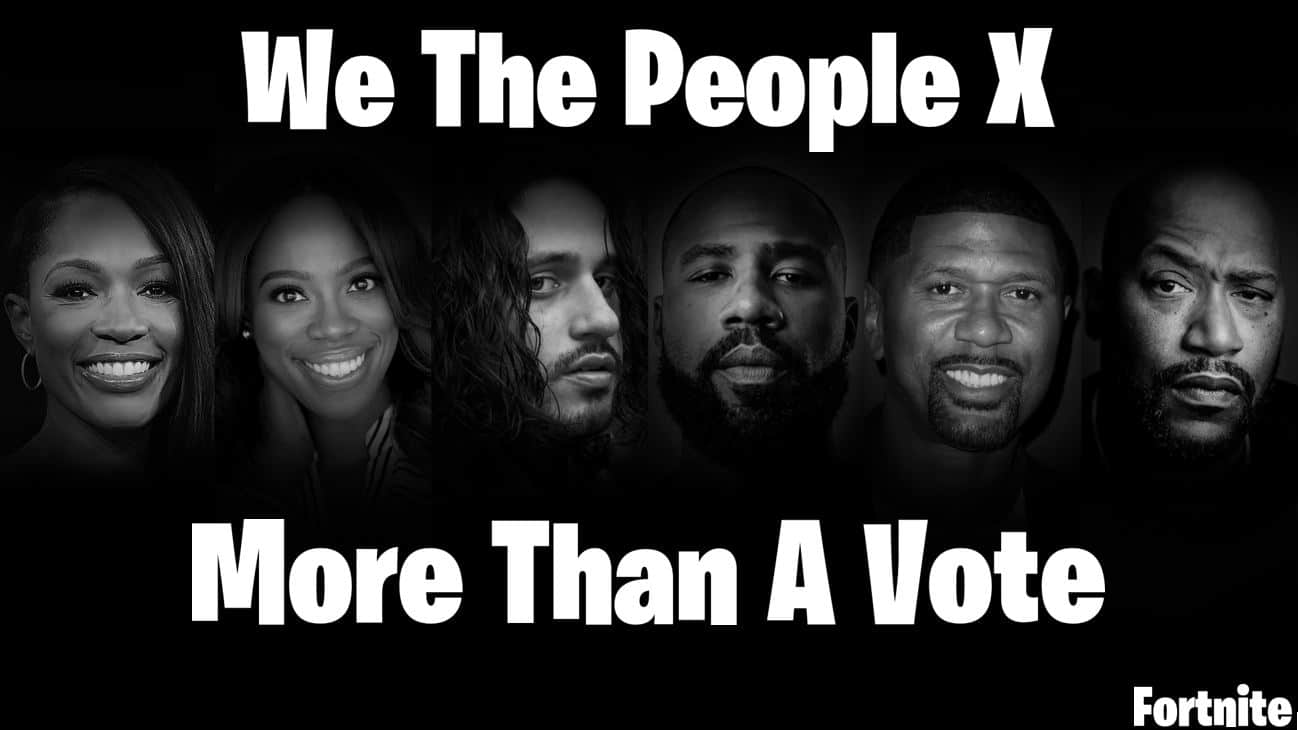 We The People x More Than a Vote Fortnite

We the People x More Than A Vote will be screening in Fortnite on Tuesday 28th July till Wednesday 29th July and a free Emote can be claimed.

Updated post: How to get the Fortnite Verve Emote today

Party Royale was added to Fortnite in April, which is more of a social place where players can enjoy live virtual concerts and movies. On July 4th, Epic had aired a show for “We The People” in the Party Royale mode, presented by ØPUS UNITED. “We The People” is a series of conversations that advance the dialogue around race in America with prominent BIPOC (Black, Indigenous and People of Color) voices in business, sports, media, music, and entertainment.

The first episode was hosted by by Van Jones, who was joined by Elaine Welteroth, former Editor-in-Chief of Teen Vogue, Jemele Hill, writer for The Atlantic, Killer Mike, rapper / songwriter / visionary, and Lil Baby, a gifted hip hop musician and they spoke on how to change systemic racism in media, culture and entertainment.

Fortnite We the People x More Than A Vote

The second installment will of We The People will be hosted by Cari Champion and features athlete Jason Heyward, rapper and activist Bun B, athlete and sports host Jalen Rose, actress and comedian Yvonne Orji and rapper Russ. It will be aired simultaneously in Fortnite and Houseparty on July 28 starting at 7:00pm ET.

It will re-air every other hour for 22 hours on Wednesday 29th July, so all players should be able to catch at least one of the viewings. Emotes will be disabled during the show.

How to Claim the Free Verve Emote

All players who attend the event in-game will receive the Verve Fortnite Emote, which was choreographed by Michael Mehej and his brother Jamie. This emote is of Rare rarity and has the description, “It’s all about the energy” and can be seen below:

All players who log into Fortnite from 27th July to 29th July by 8pm EP will be awarded the emote.